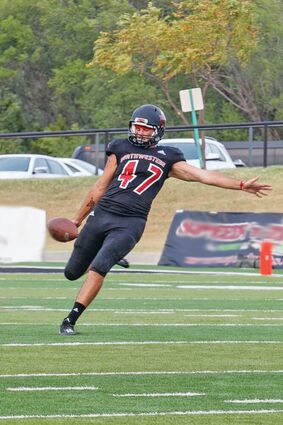 Northwestern senior Brendan Brown (47) punts the ball in Thursday's game against the Muleriders. Brown was misidentified in the Friday paper due to duplicate uniform numbers.

Alva, Okla. – Thursday night the Northwestern Rangers Football team faced off against the Muleriders out of Southern Arkansas. This was the first football game of the 2021 season and the first home game.

Northwestern's defense was led by James Ellis with ten tackles on the evening, followed by Bryce Mack with nine tackles.

Gavin Garner led all Rangers receivers with 101 yards, while Nathaniel Briscoe was close behind with 88 yards for the Rangers.

It did not take long for either team to get on the board early in the game as the Muleriders would settle for an opening drive field goal a...