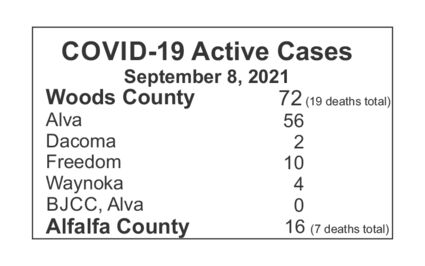 The number of Covid-19 cases in Freedom has doubled since last week. The Sept. 8 report by the Oklahoma State Department of Health (OSDH) now lists ten cases for Freedom, compared to five a week ago. Alva has 56 active cases, down two from a week ago. Dacoma decreased from two last week to only one. Waynoka stayed the same at four. Bill Johnson Correctional Center in Alva still shows no cases, according to the Oklahoma Department of Corrections website. Northwestern Oklahoma State University updates their Covid-19 cases on Friday. As of Sept. 3, they had 10 active cases among students and none among staff across the three campuses in Alva, Enid and Woodward.

The risk level map of the state shows 75 counties at the orange level. Beaver and Harper Counties are the only ones in yellow.

Total active cases for Oklahoma are 27,332, an increase of 692. Woods County increased by one with a total of 72. Alfalfa County has dropped from 24 last week to 16 on Wednesday. Major County decreased by 13 to 37 cases. Harper County decreased from two last week to one this week. Woodward County is down two with 46 on Sept. 8. Grand County has increased by 14 to a total of 37. Garfield County, which includes Enid, is down by two with 254 active cases.