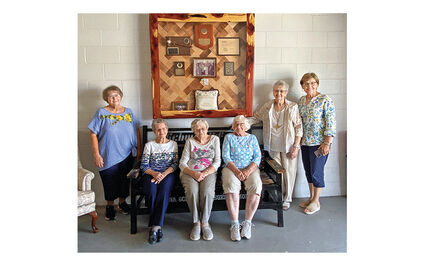 Members of the Household Executive Extension Club honor the late Donna Schwerdtfeger with this display and bench in the entry of the Women's Building at the Woods County Fairgrounds. From left are Carol Powers, Evelyn Kramp, Eleanor Ring, Jean Sneary, Carolyn Gasaway and former extension Home Economist Karen Armbruster.

Household Executive Extension Club recently honored a former member, Donna Schwerdtfeger, by placing a bench and display case in the entrance of the Women's Building on the Woods County Fairgrounds. The club was organized in 1960, and Donna joined about two years later. She was very active in various community fundraising projects and supporting a lot of other projects in Alva. 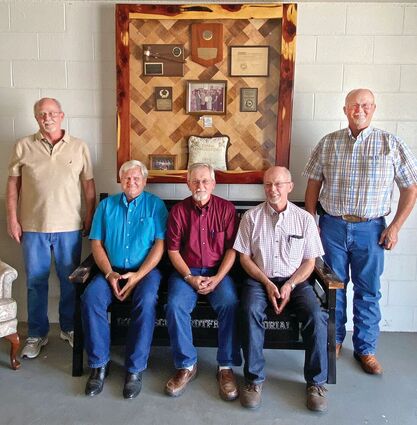 Sons of Donna Schwerdtfeger attending the ceremony honoring their mother are, from left: Gary, Ron Scott, Mark and Randy Schwerdtfeger.

In 1981 she was elected vice-president of the Extension Homemakers of Oklahoma.

In 1984-1985 she was elected as the president of the Extension Homemakers of Oklahoma, a position she held for two years. She traveled all over the state speaking at conventions and meetings.

On Tuesday, Sept. 7, family and friends met in the Women's Building to view the bench and the plaques she had received that are now on display.