'The one good thing that came out of Covid'

• Rolling out broadband internet in Oklahoma 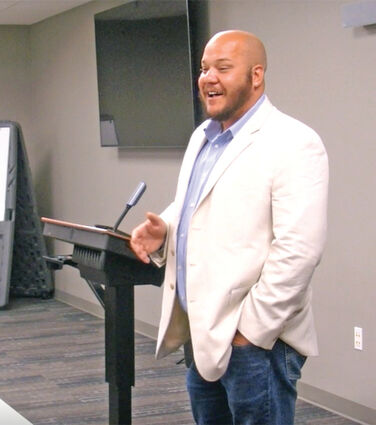 The Alva Regional Airport and the Alva Recreation Complex have a problem in common. Both have experienced difficulty obtaining reliable internet service. Ask F.M. Erikson about getting internet to his business in the same area, and he'll explain the issues he faced. Most areas of rural Woods County lack reliable coverage.

That may change in the next few years, according to State Representative Logan Phillips. He told members of the Woods County Economic Development Committee (WCEDC) Tuesday about big opportunities in broadband coverage coming to Oklahoma.

Phillips was invited to Alva by WCEDC Chairman Dr. Bo Hannaford who first met him in a Leadership Oklahoma class. "I promise, just knowing him, that he's one of us," said Hannaford. "And I appreciate him taking the time driving. District 24 is over around Tulsa."

Phillips described District 24 in Okmulgee, Okfuskee and Hughes counties as "about 2,000 miles of rural countryside, lots of farm, ag is our main infrastructure there." In the Army, Phillips worked in infrastructure "running their satellites and encryption and decryption." He's been an IT director and for 17 years now he has been a college professor in business and IT. "So teaching and broadband are pretty much everything I do, all day long, every single day."

Phillips is chairman of broadband for the state; he's chairman of technology and is on the higher education committee.

"About three years ago, I came into office with one plan," said Phillips. "That was I wanted to expand broadband connectivity to Oklahoma and get our people connected so we can have economic expansion, so we could bring in new jobs, expand out the hospital capability, our e-learning capabilities.

"Everyone at the state capitol was pretty much, 'Oh yeah, that's nice that you're doing that, but we don't really care.' It wasn't a glaring issue to anyone else."

Then the pandemic hit Oklahoma. "I tell everybody that the one good thing that came out of Covid was everybody went home at the exact same time, tried to log on, and realized that the internet capability of Oklahoma was terrible everywhere."

Suddenly Phillips started getting phone calls from the senate and house leadership. They couldn't participate in remote meetings from home due to slow internet. They were interested in fixing the problem.

The Federal Communications Commission (FCC) standard is 25 megabytes per second, thousands of times faster. The first thing the legislature did was update those statutes through one of Phillips' bills. Broadband speed capabilities were updated to match the FCC, and that will update every time the FCC updates their standards.

The ORBEC (Oklahoma rural broadband expansion council) was created with Phillips as chairman. "We brought in everybody from the co-ops to the internet service providers to fiber providers, from the wisp network providers, from the OML (Oklahoma Municipal League), mayors of small towns," said Phillips. "We put them on a round table and said, 'OK, if I'm going to run statutes and we're going to fund this, how do we do it? You guys are the ones that know how to do this. You're the experts in the fields. Tell me what we need to do as a state to not be behind in this realm.'"

For the last year the ORBEC has been working to come up with grant proposals, rules for expanding broadband, funding mechanisms and identifying all the shortcomings.

So ORBEC created a map. They didn't use the FCC map of broadband. "It is notorious for being absolutely terrible," Phillips said. The map comes from reports by internet service providers (ISP) which are usually overstated.

"We took state data, we took FCC data, we've layered that onto speed test data," he said. The speed test data from consumers tells them the real speed, not the advertised speed, of internet in precise locations. From this data and this map, they defined areas that are unserved and underserved.

They found Tulsa and Oklahoma City are served or completely covered with high-speed internet. So those cities are eliminated from the broadband plans.

To learn more and participate in the map speed test data, go to broadbandmapping.ok.gov.

Phillips thought the federal government would be sending the state $20 to $30 million for grants. With this in mind, the legislature passed a tax rebate for $47 million dollars. Companies going into unserved or underserved areas with high-speed internet could have their taxes covered through the rebate program. "It is the biggest bill, the biggest tax rebate, the Republican-controlled House has one in a very, very long time," Phillips said. He originally asked for $500,000, but other representatives spoke up, increasing it to $47 million.

Then the American Rescue Plan Act (ARPA) funds came to the state totaling $1.9 billion. Of that amount, about $600 million is for broadband expansion.

"Now we're sitting on about $600 million just for this one round, and it's a heyday," said Phillips. "We haven't seen this type of infrastructure and development capabilities, this amount of funding going into it, since the rural electrification in the 1920s."

He said it's all because the Biden administration changed a definition. "Never in history has broadband been defined as infrastructure," he said. He said this change in definition lets them tap into roads and bridges, waterways and other money. "We got to tap into a whole new tax pocket that was sitting there to build out as actual infrastructure, not just as a nicety."

The ARPA money is a one-time fund, but Phillips said if the federal government passes the infrastructure bill, "As it sits right now, Oklahoma is looking at possibly getting an additional $3 billion just for broadband build-out."

October 1 is the date to begin accepting grants for ARPA funds. Phillips said the state has an ARPA working group, the Pandemic Relief Mission, made up of four or five sub-groups. He is chairman of infrastructure, broadband, wildlife, natural resources and something else he couldn't recall.

These groups will be responsible for examining grant applications and determining which ones to approve for a portion of the $1.9 billion. Phillips said what they're looking for is projects that have a partnership with counties, municipalities, schools, career techs, "that impacts a large group of people, preferably for large areas."

Grant applications can be submitted through an online portal beginning Oct. 1, and the state has two years to encumber the ARPA money. So grants can be submitted until the money runs out or the two years run out, whichever comes first. Grantees will have four years from Oct. 1 to spend the money.

Hannaford asked about matching money on broadband grants. Phillips said "best practices" indicate a need for matching funds, probably 20 – 80 with the applicant required to provide 20 percent of the total.

Hannaford also asked about turnaround time from when grants are submitted. "For the broadband projects, we're expecting almost immediate turnover," Phillips answered. "So when those are in, we have to get going on them as fast as possible, the reason being that every state in the nation got the same type of funding. So we're going to have a massive shortage of workers and a massive shortage of physical materials."

These grant applications are different from the usual form to be filled out. It will be up to those seeking grants to come up with a proposal and present it. Phillips said the ARPA working groups do not have the manpower to handle a multitude of $5,000 and $10,000 grants. "You're looking at projects that are $1 million plus if you want to get them greenlit," he said. "Bigger projects, that once-in-a-generation projects that you can pump out and have huge impacts."

WCEDC Executive Director Neal Williams asked if the state had someone to contact to help with information for grants. Phillips said the state has hired a project management organization (PMO) as "the administrative side of us." Once the grants website is up, on Oct. 1, there will be contact points. "I don't have them right now, but they again will be the contact point," he said.

Phillips said he's aware of one company looking at going into about 75 new cities across the state producing broadband connectivity, and he believes Woodward and Alva are included in that list. "They're looking at 250,000 to 300,000 homes that have never been connected before. That project comes in at about $125 to $150 million. That's something that would be a viable option," he said.

However, companies like this will need to have partnerships in place. "So if company A comes to us and says we're going to cover Alva, Oklahoma, we can do this, my question to them will be, 'Have you contacted Alva, Oklahoma, and have they agreed to work with you on this?' And if that's not the case, then that project's not going to be granted," Phillips said.

"This is all extremely new," he said. "No one had any idea we were getting this $1.9 billion at all."

A video of the WCEDC meeting including Phillips' presentation may be seen at http://www.AlvaReviewCourier.com.