Through the kindness of strangers 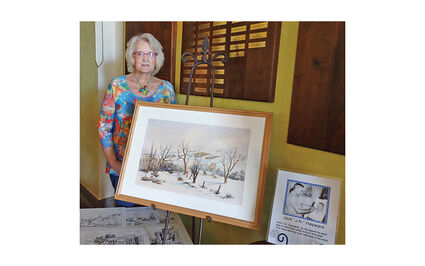 Elaine Graybill, director of the Cherokee Strip Museum in Alva, is pleased to have acquired this watercolor snow scene by Alva artist J. N. Hayward. Currently displayed in the museum entrance, it is accompanied by charcoal drawings Hayward made.

ALVA, Okla. –An original watercolor painting and prints of eight charcoal drawings by renowned Alva artist J. N. "Jack" Hayward arrived at the Cherokee Strip Museum (CSM), through an unusual series of events and the kindness of a couple of people – who have never met each other.

It all started with an online auction in Peabody, Massachusetts, in late July of this year. Jen Logan of nearby Amesbury viewed the items listed in the auction. Lot 551 caught her attention: it showed a framed 26 by 20 inch watercolor of a winter snowscape with leafless trees, and an envelope containing prints labeled "Eight Charcoal Drawings of Oklahoma Scenes," by (as the auction listing spelled it) "J. N. Howard."

A closer look at the artwork showed that the artist's name was actually J. N. Hayward, and that the painting was dated 1965. Curious to see if Hayward was a known artist, Logan searched the internet and found a blog post written by Teresa Rogers of Woodland Hills, California.

Rogers visited Alva as a girl when her grandmother, Viola Shelton Hunt, owned the Crowell house on Flynn Street. In her story, Rogers wrote about the artist Jack Hayward and his wife being good friends of her grandmother.

John Noel Hayward – better known to his friends as Jack – was born in Indian Territory in 1903, near present-day Davidson, Oklahoma. After taking a drawing class at the University of Kansas, he attended Northwestern State Teachers College (now Northwestern Oklahoma State University).

While living in Alva, Jack married Marjorie Lisk in 1927, and spent the next several years studying at various art institutions around the Western US. Jack opened his first art studio in Alva in 1951, and spent the next couple of decades painting and drawing scenes depicting the beauty and rich history of northwest Oklahoma, participating in local and regional art exhibitions, and teaching art to others. He died in 1977 at the age of 74.

Logan in Massachusetts contacted Rogers through Facebook about Hayward's artworks in the online auction. Rogers in turn contacted the Cherokee Strip Museum in Alva through the museum's Facebook page. Rogers offered to donate toward the purchase of the artwork in memory of her grandmother; Logan offered to pick up and ship the painting and the prints to the CSM if the museum was the successful bidder.

Elaine Graybill, museum business manager, worked with Logan and Rogers online with the hope of securing the artwork for the museum by the live auction deadline. This was Graybill's first experience with an online auction but she felt it was important. 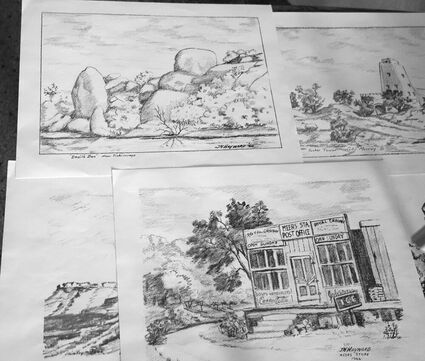 Along with the large watercolor, the museum received eight charcoal drawings with Oklahoma scenes such as the Devil's Den, Turcker Tower and Meer's Store.

At the end of the auction, the museum was the winner with only a $16.73 final bid. Since the auction house did not offer shipping, Logan made the 60-mile round trip to pick up the artwork. She had to schedule her arrival at the auction house in a three-minute time slot. Finding UPS packing and shipping too expensive, Logan then purchased her own packing supplies, boxed up the artwork, and took it to her nearest post office.

The original painting and eight prints have now returned safely home to Alva from Massachusetts. How did they get there? The museum will probably never find out, but museum staff are thankful that Logan thought it needed to be home and was willing to see it happen. Rogers helped make it possible, and the Cherokee Strip Museum and its visitors are the winners in the story.

The watercolor painting and the eight prints of charcoal drawings of Oklahoma scenes by J. N. Hayward are on display at the Cherokee Strip Museum, 901 14th St., Alva, OK 73717 from 1 to 5 p.m. Tuesday through Sunday (except holidays). For more information, call 580-327-2030 or visit https://www.csmalva.org/home.