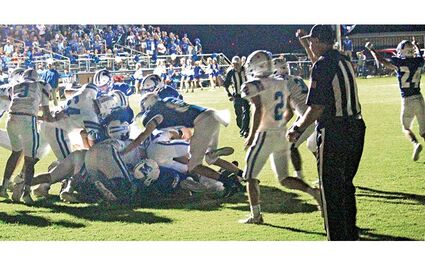 The crowd stands and waits for the referee to rule it a touchdown, which gives the lead back to Mooreland with less than two minutes left in the game. It proved to be the winning touchdown.

The Mooreland Bearcats took on the Woodland Cougars in Mooreland's first home game. The first quarter proved to be a defensive battle with neither team scoring. In the second quarter, the Cougars began with the ball on the Bearcats' 15 and scored the first points with a pass into the end zone from Cougars quarterback Aiden Rhodes (No. 10) to his receiver, Jackson Rhodes (No. 7). Their 2-point conversion failed, and the Cougars led 6-0. Their lead was short-lived after the Cougars' kick-off to the Bearcats, and Stetson Roper (No. 24) ran the ball 60 yards for a Bearcat touchdown. Their 2-point conversion succeeded, and the score was 8 to 6.

The defensive battle continued until the Cougars found themselves in scoring position on the Bearcat 15 yard line with 53 seconds left in the half. The Cougars faced a fourth down and 5 yards to go and the quarterback scrambled to the 8-yard line and a first down.

After a delay of game, the Cougars were pushed back to the 13. The Cougar quarterback tried a pass to the corner of the end zone to J. Rhodes but it fell incomplete. With time ticking away, the Cougar quarterback rolled out to his left and looked to pass but instead scrambled into the end zone for a touchdown. They added a 2-point conversion and the half time score was Mooreland 8 – Woodland 14.

The Bearcats scored first in the third when Connor Scarborough was handed the ball and ran for 46 yards, adding 6 more points. Then in a quarterback keeper, Carter Sampson added 2 more. The Bearcats led 16-14.

The Bearcats scored one more time in the third quarter when Scarborough ran into the end zone 12 yards out, and Sampson added two more. There was under five minutes left in the third, and the Bearcats' lead was extended to 24-14.

The Cougars did not lie down. When the wide receiver, Jackson Rhodes, received the ball he outran the defense 46 yards and scored. The 2-point conversion was good and the Cougars stayed close with a score of 24-22. 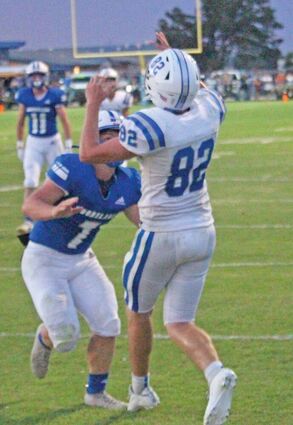 Mooreland defender Austin Owens (No. 12) distracts Cougar player Lucian McKinney (No. 82) in the end zone. The ball was ruled uncatchable.

The fourth quarter was riddled with penalties by both teams but they kept their heads up. With under 10 minutes left the Cougars recovered a Bearcat fumble and began their drive from mid-field. The Cougars worked their way down to the 8 and J. Rhodes was handed the ball and worked his way into the end zone. The 2-point conversion was good, and the score favored Woodland 28 – Mooreland 24.

The Bearcats once again found themselves trailing. They were facing fourth down and Sampson pushed forward, gaining a first down on the Cougar 34. Add two more first downs and Mooreland found themselves in scoring position with 1:03 left, second down, and on the 3-yard line. Sampson took the snap; Scarborough scooted around the corner to the 1-yard line. Then Sampson took the snap and followed his linemen through the middle to the end zone. The 2-point conversion was good, and Mooreland led 30-28.

After the kick-off, the Cougars took possession on the 50-yard line and a chance with 28 seconds left. The Mooreland defense buckled down. The Cougar quarterback attempted to pass it downfield but Rhodes's last pass was intercepted by Roper after the ball was tipped in the air. Time ran out with a win for the Bearcats. The final score: Mooreland 30 – Woodland 28.

Mooreland's next game is at home against Thomas on Friday, Sept. 24, beginning at 7 p.m. They play at Burns Flat-Dill City on Oct. 1. Mooreland's record is now 2 – 0.