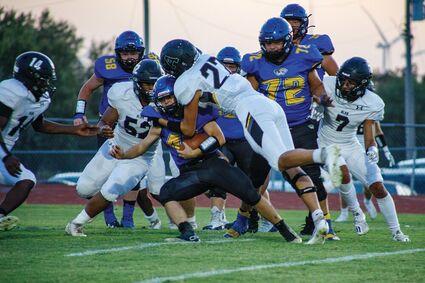 The Alva Goldbugs began district play Friday night with a lopsided 50-14 victory over the Newkirk Tigers. A couple of players normally known for their basketball skills joined the Goldbugs for the away game. Jackson Feely took over kicking duties, and Kyler Penco also took to the field.

The Goldbugs were first on the scoreboard in their first possession of the game. Newkirk answered, but Alva scored again to lead 12-6 at the end of the first quarter. Newkirk didn't score again until the final period while the Goldbugs stretched their lead to 26-6 at the half and 42-6 in the third. Both teams scored in the last quarter for the 50-14 final.

Newkirk had the football first but Goldbugs Drew Glass and Lantz Mathers tackled the Tigers for a couple of losses, and they had to punt.

Daylon Malone ran back the kickoff to the Alva 47. Runs by Aiden Faison and Drake Wharton gave Alva a first down. A false start by the Goldbugs gave them five extra yards to make up. Quarterback Kaden Slater took care of than in a run up the middle. At the Newkirk 31 yard line, Slater threw the ball to Weston Tucker who ran all the way to the end zone. The ball was bobbled on the snap, and Alva didn't get the extra point. The Goldbugs led 6-0.

Again, the Tigers could make no progress against the strong Alva defense and had to punt.

At the Newkirk 43, Slater handed off to Wharton for two runs and five yards. An incomplete pass was almost picked off. On the fourth down, Slater passed to Wharton who couldn't hold onto the ball.

The Tigers took over on their 37. After an incomplete pass, Clayton Bergman handed off to Dalton Osborn who found a hole and ran to the Alva ten before being pushed out of bounds. Bergman kept the ball to gain two yards. He tried a pass over the middle that was batted down by Faison. Bergman gave the football to Osborn, but Alva pushed him back to the ten. On the fourth down, Bergman tried a pass into the end zone, but it was tipped and incomplete.

Alva had terrible field position on their ten yard line. Slater's first two passes were incomplete. On the third pass up the middle, Tiger Daniel Harrelson picked it off near the 35 and ran to within a yard of the Goldbug goal.

A handoff to Colt Stone went nowhere so Bergman elected to keep the ball and ran across the goal line. Bergman tried passing for the conversion, but Goldbug Daylon Malone picked it off. The score was tied at 6-6.

The Goldbugs began their drive at their 35. Faison ran the ball for seven yards. Slater gave the ball to Wharton who took it all the way to the goal, but there were flags on the field. Instead of a touchdown, Alva received a five-yard penalty for an illegal shift. The Goldbugs had to break the tie the hard way.

Wharton was handed the ball and nearly broke away but was stopped at the 47. Slater gave the ball to Wharton for a gain of six. On a quarterback keeper, Slater took the Goldbugs to the Newkirk 21. Carries by Wharton and Slater took the ball to within two yards of the goal. Slater gave the football to Wharton who took it in for the touchdown. Feely's extra point kick was blocked. Alva led 12-6.

With seconds to go, Alva tried an onside kick. The referees whistled the Goldbugs for kickoff interference, and the quarter ended.

Newkirk again made little progress and had to punt.

Beginning at the Alva 20, the Goldbugs made steady progress. At one point, a high snap caused Slater to leap for the ball. He managed a pass to Faison and a first down. At the Newkirk 18, Slater was hit in the backfield by Dayton Mayse for a loss. There was a flag on Alva, but the penalty was declined. Back at the 22 with 14 yards to go Slater passed to Tucker who took the ball into the end zone. This time the two-point conversion was good, and Alva led 20-6.

Starting at their 20, the Tigers lost five yards on a false start. Then quarterback Bergman was sacked, Newkirk had to make 19 yards for a first down. After an incomplete pass, Harrelson punted.

At the Newkirk 37, Alva had a false start for a five-yard penalty. Following an incomplete pass, Slater tried again, but the Goldbugs drew another five-yard penalty, this time for an illegal receiver. A pass from Slater to Malone gained 13 yards, but Alva still needed seven for the first down. After two incomplete passes, the ball went to Newkirk.

With less than two minutes until the break, Alva advanced on a Slater pass to O'Neil and a Wharton carry. Slater tried a keeper but was tackled for no gain. His pass connected with O'Neil who took it to within five yards of the goal. Slater ran the ball across for the TD. Feely's extra point kick was blocked, and he was hammered by the Newkirk defense. Alva led 26-6.

Newkirk managed two plays before time ran out. At halftime the score was Alva 26, Newkirk 6.

The Goldbugs had decent field position at their 41 to start the quarter, but they began badly with a five-yard penalty for a false start. A pass from Slater to Malone advanced the ball seven yards. Then Wharton caught and dropped a pass for a loss of four. After a bad snap, Slater threw the ball to Tucker and it was dropped again. After another penalty, Newkirk took possession on the Alva 35.

The Tigers weren't able to capitalize on their position, gaining three yards and then losing three. After another try that went nowhere, Harrelson punted.

Starting at the Alva 14, Alva drew a flag on the first play. Two more snaps and two more flags stalled Alva's progress. Then iIn three quick plays, the Goldbugs advanced to the 26. Slater gave the ball to Wharton who pushed back a pile of Tiger defenders to gain nine yards. A flag on Newkirk for unsportsmanlike conduct moved the Goldbugs up to the 50. Two carries by Wharton put Alva on the 32. Slater passed on the run, and it was picked off by Pankey. The refs called an illegal forward pass on Alva, but it was declined, and the Tigers kept the ball.

At the Newkirk nine-yard line, Bergman handed the ball to Osborn who gained one yard. After two incomplete passes, the Tigers had to punt. A bad snap led to a short kick, and Alva took over on the Newkirk 35.

For three plays, Slater gave the ball to Wharton who ran with it, eventually reaching the ten-yard line. One more handoff to Wharton, and the Goldbugs had another touchdown. Wharton ran in the two-point conversion, and Alva led 34-6.

Starting at the Newkirk 36, Bergman kept the ball for a gain of one yard. On the next play, Tiger protection couldn't stand up to Ben Eades who sacked Bergman for a loss of five. Bergman's pass was tipped incomplete, and Newkirk had to punt.

Alva had a good thing going with Wharton running the ball. At the Alva 44, Slater handed off to Wharton to gain one. On the next play, Wharton broke a tackle and took the ball into Newkirk territory for the first down. Wharton carried the ball from the 44 to the 29 and another first down. Wharton gained two yards on the next carry. Slater tried a pass, but the receiver was hammered and Newkirk was flagged for pass interference.

At the Newkirk 11, Slater handed off to freshman Demarkus Wharton. He gained a yard. Then Drake Wharton took the handoff and ran the ten yards for a Goldbug touchdown. Wharton took the ball in again for two points, and Alva led 42-6.

With less than a minute left, Bergman gave the ball to Osborn who was taken down for a loss of two. Bergman connected on a pass to Landon Hey for the first down and more.

The Goldbugs led 42-6 at the end of three periods.

The quarter opened with Newkirk at the Alva 42. Bergman threw the ball on the run, but Miller made his third quarterback sack of the game and caused a loss of eight yards. Then Newkirk was called for a false start. On the third down, Bergman's pass was caught by Gunnar Cole who ran for the touchdown, a 31-yard play. Bergman passed to Osborn for the two-point conversion. Alva now led 42-14.

After the kickoff, Alva began at their 41. Slater's pass was in and out of the receiver's hands. On the next play, Slater kept the ball and ran it to the Newkirk 48 and the first down. Slater threw to Randall for a gain of eight. Slater connected on a pass to Wharton who ran it 40 yards to the goal. But the ball was called back on an Alva holding penalty. After three incomplete passes, Newkirk took over on their 45.

With no gain on the first play, Bergman was sacked by Miller on the second. A flag thrown after the snap resulted in a penalty on Alva for a personal foul. That put Newkirk on the Alva 46, and that's where they stayed. Bergman handed off to Cole who was tackled for a loss. However, a facemask penalty on the play gave back five yards to the Tigers. On the next play, Bergman elected to carry. In a collision with Mathers, the ball popped loose and Alva gained possession.

At the Alva 45, Slater passed to Malone who was wide open. He ran all the way to goal for a 55 yard pass play and the touchdown. Slater's pass for the conversion added two more points, and Alva led 50-14. 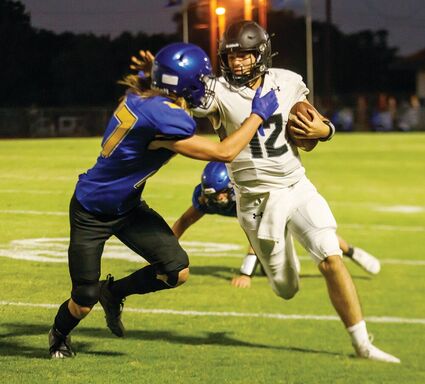 Goldbug quarterback Kaden Slater (12) runs the ball and tries to keep the Newkirk defense at bay.

With seven minutes left in the game, Alva began substituting from the bench. After Newkirk made no progress, the Goldbugs took over at the Newkirk 45. Freshman Cambell Gaisford stepped in as quarterback for Alva. Boden Miller, Demarkus Wharton and Gaisford himself had carries, but a 15-yard holding penalty was too much to overcome.

Newkirk took possession on their 35 but couldn't make the first down. Alva had time for three more plays before the clock ran down. The Goldbugs had their first district win of the season at 50-14.

Next Friday, the Alva Goldbugs will take on Oklahoma Christian School at home with a 7 p.m. kickoff. After that will be the homecoming game against Luther on Oct. 8.

OCS will come into the game after a 45-7 win over Chisholm. In other Class 2A-1 games Friday, Luther beat Blackwell 48-8 and Perry topped Hennessey 34-13.