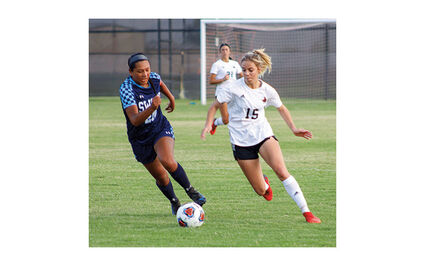 Forward Isabella McMillan (15) races to get the ball from the Southwestern player during Tuesday's game.

ALVA, Okla. – The Northwestern Soccer team continued their home stand on Tuesday as they opened conference play with a match against the Bulldogs of Southwestern Oklahoma State University. The Rangers and the Bulldogs went into double overtime here at Ranger Soccer Field.

The Rangers came out ready to battle as they started conference play. The game went back and forth as the Rangers and the Bulldogs traded possession during the first half, neither team able to find a rhythm offensively. The Bulldogs out-shot the Rangers 8-5 with the Bulldogs having four shots on target and the Rangers having two.

The score was tied 0-0 going into half-time.

Ranger goalkeeper Reagan Allen was faced with 18 shots, but only 12 were on target. After going through 110 minutes, Allen had a clean slate without allowing any goals being allowed for her second shut of the season.

The Ranger defenders held down their side of the field as they controlled the game defensively. The Rangers did not allow a goal throughout the second half. Center midfielder Lily Anderson had a couple great saves by heading the ball out on dangerous free kicks that were directed on target.

"It was a very hard-fought game tonight by both teams. Anytime you go down a player via red card it is very difficult. We are extremely proud of our team to persevere and overcome a lot of adversity to earn a point tonight," said coach Alex Piekarski.

Southwestern and Northwestern played to a draw to open conference play here in the 2021 season 0-0. The shutout is the Rangers' second of the season and the first tie against Southwestern since 2019 when the teams played to a 1-1 draw.

The Rangers' Thursday game was postponed due to rain. It has been rescheduled to Monday, Oct. 4, against the Tigers of East Central. The Tigers are currently 0-1 in conference. The game will be played at Rangers Soccer Field and kick off will be at 6 p.m.