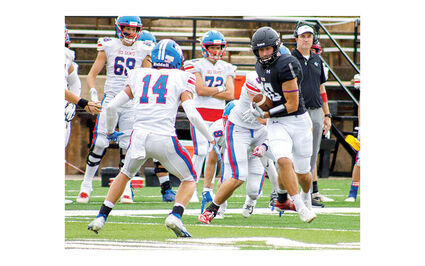 Kelton O'Neil (10) gets caught up in the Oklahoma Christian School Saints' defense but still manages to gain yards.

Oklahoma Christian School came to Alva undefeated this season and left the same way. The Goldbugs had a tough time against the highly ranked OCS Saints. Alva was unable to score until the third quarter. The final was OCS 53, Alva 19.

The Goldbugs managed to cut back on penalties following an excessive number in the Newkirk game. However, the OCS defense stymied Alva's rushing offense and several times the Goldbug receivers couldn't hold onto passes. A couple of Alva passes were picked off resulting in OCS scores.

The game was moved up to a 1:30 p.m. start on Friday due problems getting officials. The first set of officials was affected by Covid but Alva wasn't notified until late. A second set of officials was secured, but they opted out on Thursday. The third set was committed to a night game elsewhere, but agreed to handle the Alva-OCS matchup if it could be moved to the afternoon.

The Goldbugs had the first possession of the game and managed to make a first down on a quarterback keeper by Kaden Slater. The next series went nowhere, resulting in a punt.

OCS didn't do any better with Keaton Lewis tackling Saints runner Caleb Barnes for a five yard loss. OCS couldn't make up the deficit and had to punt.

At the Alva 20 yard line, Slater gave the ball to Drake Wharton who gained three yards. Slater tried a pass, but Luke Watson picked it off and ran 23 yards for the OCS touchdown. John Michael Crooks kicked the extra point through the uprights, and OCS led 7-0.

The Goldbugs gained three yards rushing but had to punt after two incomplete passes.

After a rushing gain of three yards, Garret Wilson passed to Collin Matteson who was hit by Goldbug Lantz Mathers and lost the ball. Phillip Randall recovered the fumble for Alva.

Alva's possession was highlighted by a nice pass from Slater to Daylon Malone who leaped to catch it among three Saints defenders. But the Goldbugs stalled at the 45, and Slater had to punt.

At their 14 yard line, Wilson threw to Matteson who broke loose and ran about 40 yards before Wharton ran him down and tackled. The play was negated by an OCS holding penalty. The Saints were now at their eight yard line. From there, it took OCS seven running plays to reach the goal line with Barnes credited for the touchdown. The extra-point kick failed. OCS now led 13-0 as the quarter ended.

The second period started badly for Alva with a two yard loss and an illegal formation penalty. Slater was sacked for a 12 yard loss, and Hunter Miller had to punt.

With good field position at the Alva 19, OCS needed only four plays to score. Barnes ran untouched for the final seven yards to the goal line. Crooks' kick was good, and OCS led 20-0 with nine minutes left.

Despite the running efforts of Slater and Wharton, Alva couldn't capitalize on their next possession. A false start penalty didn't help. Then a nice pass from Slater to Kelton O'Neil was wiped out by a Goldbug holding penalty. Aiden Faison caught another pass but was quickly brought down for a loss. Miller's long punt was accidentally kicked out of bounds at the OCS one yard line.

A yard from their goal, the OCS team lined up but delayed their start, probably trying to draw movement and an Alva penalty to gain a better field position. It didn't work. What did work was a 19 yard run by Matteson. A 40-yard pass play and an Alva facemask penalty put OCS on their 45. Advancing to the 49, Saints quarterback Wilson passed to Matteson who found wide open space to the goal line. Wharton blocked the extra point kick, but the Saints now led 26-0.

At the Alva 26, Slater gave the ball to Mathers for a gain of two yards. Slater passed to Wharton who fumbled the catch, and OCS fell on it.

At the Alva 19 with less than two minutes on the clock, OCS made it to the Alva ten before a holding penalty moved them back 15. From the 25, Wilson threw over the middle to connect with Will Watson for the touchdown. The kick was good, and OCS led 33-0 as the first half expired.

Due to a Matteson runback of the kickoff, OCS began the third period in decent field position at their 41. On the first play, Barnes found an open field and ran for the touchdown. The kick was good, and OCS led 40-0.

From their 14, Alva gained five yards on a pass by Slater to Weston Tucker. Wharton ran to the 19 for the first down. Following an incomplete pass, Slater took the ball and ran to the 42. Then protection broke down, and Slater was sacked for a big loss on the next play. The Goldbugs couldn't recover and had to punt.

At their 43, OCS began with a pass from Wilson to Henry Rothwell who was hammered by Lewis, Miller and Sylus Graves for a loss of three. As Wilson tried another pass, he stumbled and muffed the throw. Malone picked up the fumble, giving Alva possession on the OCS 27.

The Goldbugs gained only two yards before a Slater pass was picked off by Gannon Roberts in the end zone.

The pick put the Saints at their 20 yard line. It took six plays to cover the 80 yards to the goal, culminating in a pass from Wilson to Watson in the end zone. The kick failed, and OCS led 46-0.

Malone had a good runback on the kickoff to put Alva at their 38. Slater connected with Wharton on a pass, and Wharton ran all the way to the goal with Tucker clearing the way. Shane Feely made the extra point kick, and Alva was finally on the scoreboard 46-7.

OCS brought in their second offense with freshman Wyatt Fitzgerald at quarterback. On the second play with the snap going over his head, Fitzgerald had to fall on the ball.

The quarter ended with OCS 46 and Alva 7.

The Saints couldn't make up the lost yards and had to punt.

Alva began at the OCS 42 and made it to the 15 mainly on runs by Slater and Wharton. Two more runs by Slater put the ball in pay-dirt. Feely's kick was blocked, but Alva had another TD on the board 46-13.

Matteson caught Feely's kickoff and ran the 80 yards to the goal for another OCS touchdown. Crooks' kick was good, and the Saints now led 53-13.

From the Alva 29, the Goldbugs gained 15 yards on an OCS pass interference call. Slater connected with Kyler Penco for a gain of five. A run by Wharton made the first down into Saints' territory at the 43. Slater found 24 yards of running room to the 19. A fake and keeper by Slater gained another six yards, but OCS was catching on. When Slater kept the ball again, he was tackled for a loss of four. A pass to Tucker gained four to put Alva back at the 13. On the fourth down, Slater's pass was over Malone's head in the end zone.

Taking over at the OCS 13, the Saints lost yards back to the four and had to punt. 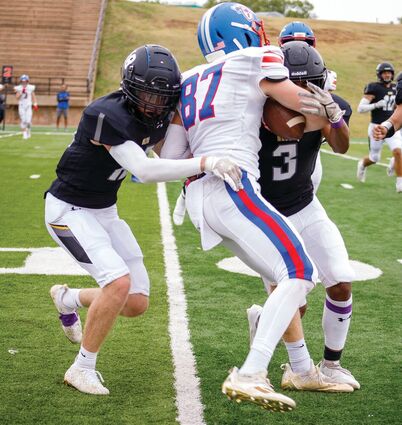 At the OCS 45, Slater gave the ball to Wharton who found room to run all the way across the goal line. However, the play was called back on a blocking infraction on Alva. The scrimmage line was marked from the point of the infraction at the OCS 28. From there Slater passed to O'Neil in the end zone for the touchdown. Feely's extra point failed. The score was now 53-19, and that's how the game ended as the final seconds ran out.

With the loss, Alva moves to 1-3 for the season while OCS remains undefeated at 5-0.

Next Friday the Goldbugs will host Luther for Homecoming. Kickoff is at 7 p.m. following the coronation. The AHS homecoming parade and pep rally with a theme of "Game On" is at 2 p.m. Friday on the downtown square.