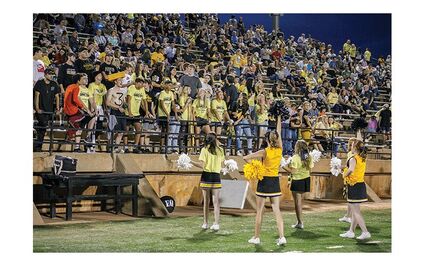 Alva High School students cheer with the cheerleaders during the homecoming game against Luther.

About halfway through the second quarter, it looked like the Alva Goldbugs had a good chance to pull off their second district win of this season. But the outlook changed quickly, and by the half Alva was down three touchdowns. The Luther Lions held the Goldbugs scoreless the rest of the game and celebrated the 47-15 victory as they returned home. It was a disappointing finale to the Alva homecoming celebration.

The Lions took the kickoff and steadily advanced from their 14 yard line to the 39. Senior quarterback Braden Browning passed the football to senior wide receiver Daviion Wyckoff who raced untouched to the goal line 61 yards away. The Jace Mills kick was good, and Luther led 7-0.

After the Goldbugs advanced on a run by Drake Wharton and a pass to Kelton O'Neil, senior quarterback Kaden Slater was sacked by Logan Franklin for a loss of eight yards. Despite an athletic diving pass catch by Daylon Malone, the Goldbug drive stalled and they had to punt.

Starting on the Alva 49, Luther made little progress. On the fourth down, Browning faked a handoff to Ruben Vega and a flag was thrown. Luther was backed up ten yards on a holding penalty. This time on the punt, Mills had to deal with a bad snap. Alva's Aiden Faison grabbed him by the jersey, securing great position on the Lions' 30 yard line for the Goldbugs.

Slater gave the ball to freshman Lantz Mathers who gained three yards. On the next play, Alva drew a penalty, setting them back to the 35. Slater's pass to Malone gained three yards. Slater sailed a long pass to Phillip Randall at the 20 yard line. He caught it and almost made it to the goal. With one yard to go, Slater kept the ball and scored the touchdown. Jackson Feely's extra point was good, and the score was tied at 7-7.

On the kickoff, speedy Wyckoff ran the ball back about 85 yards, but a holding call on the Lions negated some of that. Starting at the Luther 32, Browning ran the ball ten yards. However, a holding call moved it back to the 22, and negated the run. Browning connected on a pass to Wyckoff who was wide open. He ran all the way to the goal. Mills' kick was good, and Luther led 14-7.

Taking the ball at their 28, the Goldbugs made it to the 40 where Slater was sacked by Browning for a loss. On the next play, Slater's pass was knocked away. With 17 yards to go on the third down, Slater dropped back to throw and was sacked by Owen Wilson.

The quarter ended with Luther leading 14-7.

The quarter began with a punt by Slater to the Luther 15. Aidan Maley ran the ball back, but a holding call on the Lions set the scrimmage line on the Luther 10. The Goldbug defense held the line, and Luther had to punt.

Taking over at the Luther 33, Slater handed off to Wharton three times for the first down. Now at the nine-yard line, Slater took the ball across the goal line for the TD. As Feely set up to kick, the snap was fumbled. Drew Glass grabbed the ball and ran it across the line for two points. Alva now led 15-14.

The Lions took possession on their 40 yard line and lost four yards on the first play as Goldbug Keeton Lewis tackled Vega. A pass to Wilson gained 13. A keeper by Browning put the Lions in Goldbug territory at the 46. After gains by Vega and Browning, Vega took the ball all the way to the goal. However, a holding call on Luther negated the TD and put the ball at the Alva 31.

Browning ran the ball for 11 yards until Mathers brought him down. Wyckoff managed an eight-yard gain before Lewis and Glass put on the brakes. Luther lost five yards on a penalty for moving too soon. Now at the Alva 16, Vega ran for nine yards and then four more. At the Alva five, Browning kept the ball and scored the touchdown. The two-point conversion failed, and Luther led 20-15.

The ensuing kickoff fell near the Alva goal line and bounced. Alva players watched for it to roll out of bounds, but a Lion player grabbed the live ball at the two-yard line instead.

Luther set up at the two-yard line, and Browning handed the ball to Elijah Scott. The Goldbugs stopped him for no gain. This time Browning kept the ball and made it across for the score. The kick was good, and Luther led 27-15.

On the kickoff, Glass had a good runback before going out of bounds. There was a flag. Was it a late tackle after Glass was outside the line? No, the referees signaled a personal foul on Alva. A great deal of discussion ensued with Alva Coach Dave Foster talking to the referees. The Luther coach got in on the talks.

Asthe dust settled, Alva was moved back to the 39. After gaining three yards on a run by Wharton, the Goldbugs were stalled and had to punt.

At the Luther 29, the Lions executed a double pass play. Quintin Richardson ended up with the football and took it to the goal. The kick by Mills was good, and Luther led 34-15.

Alva's DeMarkus Wharton had a great runback on the kickoff. Slater's pass from the Alva 35 was incomplete, but Luther was penalized ten yards for holding to give Alva the first down. Slater threw the ball to Weston Tucker who made the catch despite its being tipped. He took it to the Lion 38. Helped by another Luther penalty, the Goldbugs were soon at the 20 yard line. Slater's next pass was picked off by Wyckoff. There were a bunch of flags thrown.

After all the penalties were settled, Luther was on their six-yard line. Browning gave the ball to Vega who gained six yards. Play ended as the half expired. Luther led 34-15 going into the break.

The Goldbugs had possession of the ball to start the third quarter. A long kick by Mills put them on the Alva five-yard line. After a two-yard run by Slater and two incomplete passes, Alva had to punt.

Starting at the Alva 37, it took Luther six plays to score despite another penalty for holding. At the Alva 18, Browning threw to a Lion receiver in the end zone but didn't connect, and Alva was penalized for pass interference. That moved the Lions to the nine-yard line. Browning gave the ball to Scott who took it to the two. Vega ran the last two yards for the touchdown. Mills' kick was good, and the Lions led 41-15.

At the Alva 22, Slater gave the ball to Wharton who made the first down. Two keepers by Slater gave Alva six more yards. On the next play as he looked for a receiver, Slater was sacked for a loss. Alva had to punt.

Luther started substituting players with freshman Brody Becker as quarterback. The Lions advanced from their 33 to Alva's 33 where Becker's pass was picked off by Glass. The following run by Glass was called back on a Goldbug illegal block.

Alva was at their 17-yard line. Slater passed the ball, and Aidan Maley intercepted it.

With Luther in possession at the Alva 21, Vega ran for three yards. The Lions were called for holding on the next play. With rushing gains for one and two yards, the Lions attempted a 37-yard field goal. Mills' kick failed.

Alva had one play for no gain as the quarter ended. Luther led 41-15.

An illegal substitution on Luther gave Alva five yards, but as Slater gave the ball to Faison, it was poked away and Luther took over.

From the Alva 23, Becker gave the ball to Kolton Starkey for a two yard run. Becker connected on a pass to Wilson who took it in for the touchdown. Mills' kick failed, and Luther led 47-15.

Starting on the Alva 29, the Goldbugs made it to the Lion 46. After an incomplete pass, Slater lost control of the ball, and Starkey took possession. Alva was flagged for unsportsmanlike conduct.

The Lions started their drive at the Alva 30. Despite a false start penalty, they made it to the Alva 20. Becker connected on a pass to Kris Hines to take Luther to the eight-yard line. Becker tried a keeper, but Lewis tackled him for a loss. On the fourth down, Mills tried another field goal that failed.

With a little over two minutes left in the game, Coach Foster sent in younger Goldbugs. Freshman Cambell Gaisford took over at quarterback. With runs by Gaisford and Demarkus Wharton, Alva pushed to the Luther 45. Gaisford threw the ball to Boden Madrid for a four-yard gain. His next three passes were incomplete, and Luther took over with a few seconds left.

Expecting a kneel-down, the Goldbugs weren't prepared for a 59-yard run to the end zone by James Goers. It was called back on a Luther holding penalty, and time ran out. The final score was Luther 47, Alva 15.

Alva is now 1-2 in district play. Next week the Goldbugs travel to Perry to take on the Maroons in a Thursday night fall break game. Kickoff is 7 p.m. 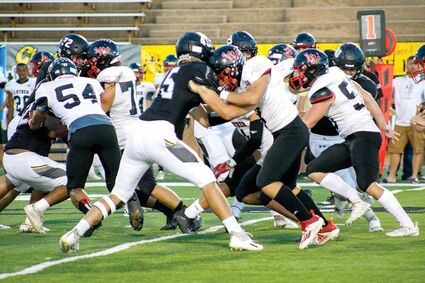 Alva's Sylus Graves (45) tries to stop Luther from getting through.