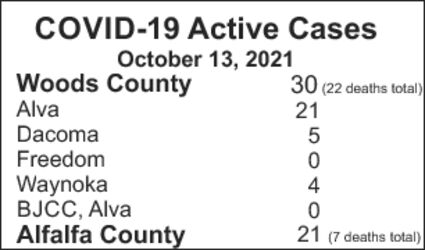 Woods County active cases of Covid-19 continue to decline according to the Oklahoma State Department of Health (OSDH). The weekly report issued Wednesday, Oct. 13, shows Woods County with 30 active cases, down four from a week ago. Alva has 21 cases, down seven from last week. Dacoma had zero last week but lists five active cases this week. Waynoka has four, down two from a week ago. Freedom still has zero cases. Bill Johnson Correctional Center in Alva reports zero cases.

Northwestern Oklahoma State University lists ten cases, all students, as of Oct. 8 on their three campuses in Alva, Enid and Woodward.

In Oklahoma, the total number of active cases continues to decrease. On Wednesday the total was 11,905, down 1,083 from a week ago. As of Oct. 4, the OSDH reported 1,901,711 or 57.2 percent of the eligible population of Oklahoma had been fully vaccinated. Already by Oct. 4, 86,514 people had received the third booster shot.

Looking at surrounding counties, Alfalfa County has 21 active cases, up ten from last week. Harper County has 11, up four; Major County has 39, up nine; and Woodward County has 79, up 21.