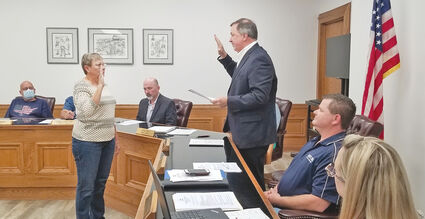 The first order of business for the Alva City Council meeting Monday was the appointment of Wanda Gail Swallow to fill the vacant Ward 2 seat. Brandon Sherman moved outside the city limits and was no longer eligible to serve.

Introducing his selection for the vacancy, Mayor Kelly Parker said Swallow would further diversify the demographics of the city council. She is a retired educator, has experience with the EMS, and is married to retired game ranger Terry Swallow. Daniel Winters made the motion to approve Swallow's appointment, seconded by Troy Brooks. The motion passed by a unanimous vote.

Several students from an NWOSU journalism class attended the meeting to fulfill an assignment.

What Committees and Boards Discussed

Members of city boards and committees provided updates from recent meetings. Winters said the Ordinance Committee is working on the beekeeping ordinance which violates the Oklahoma Apiary Act. They brought in Dr. Steve Thompson from NWOSU to discuss bees and beekeeping.

Taylor Dowling reported the Public Safety Committee has been looking at school safety zones, particularly around Washington Elementary. Sadie Bier said she has witnessed several near-accidents when parents are picking up students. The committee is looking at extending the no parking area along the east side of Seventh St. from Church St. north to Barnes St. to relieve congestion. City Attorney Rick Cunningham said there is a no parking area next to stop signs, and if that were enforced it could relieve some of the problem.

Greg Bowman reported the Sanitation Committee mainly discussed that all the equipment is worn out. Equipment including trash trucks needs to be leased, purchased or repaired.

Reporting on the Street and Alley Committee, Mayor Parker said the one block asphalt paving project on College Ave. between Flynn and Barnes is being wrapped up. The next project will be paving Fourth St. between Flynn and Barnes, but this needs to be a concrete project. They discussed the street department doing the work themselves or contracting out the project. Staff members are to bring back more information. Bier asked about problems with street work in front of the fire department. Parker said they have discussed options including relocating trucks outdoors if weather permits.

Bowman reported on the Alva Hospital Authority meeting. He said the biggest concern right now is the vaccine mandate and what that would do to staffing. It was estimated 15 to 25 percent of hospital and nursing home employees could be affected.

The Water and Wastewater Committee learned that the waterline to the high school is delayed, said Randy Stelling. The contractor is still waiting for materials to complete the project. They have discussed updating the city's water and sewer maps at an estimated cost of $5,000. The committee also discussed having a study done on the longevity of the city's water wells with the costs estimated at $15,000. The city is also getting a supply of new water meters for winter months when the meters tend to fail.

Discussion at the Parks and Buildings Committee meeting centered on swimming pool plans and progress, said Bier. The committee looked at two different plans from the engineer and liked parts of both. They plan to draft a memo to the engineer about this. The committee toured the city-owned Professional Building where plans are to switch to LED lighting. Brady said plans are being put together to obtain bids. Bier said they talked about some kind of signage at the front of the building as there's "no way to know who's in there" now.

Dowling reported on the Library Board. They are reviewing all the policies developed over the years. The Little Explorers have increased the number of bags being sent out from 25 to 36. In January they hope to go back to in-person meetings of this pre-school group.

The Airport Commission had a light agenda, Parker said. September had the highest fuel sales of the last 12 months. The airport accepted a donation of World War II jackets and an article about Pearl Harbor from the viewpoint of a man with Alva ties. The items were donated by the Smith family.

The Finance Committee met just before the council meeting. Connor Martin said the city's Sept. 30 cash balance was almost $1.6 million with another $3.7 million in investments. As of Sept. 30 the city has received 23 percent of the revenue budgeted for the fiscal year and spent 21 percent of the annual budget which runs from July 1 to June 30. At $355,000 the September sales and use tax collections were down seven percent from August but up 11.5 percent from September 2020.

The Finance Committee also discussed the possible impact of hiring a grant writer for the city. However, that is not an expense currently in the budget. Dowling asked if they discussed the cost. Parker said it would probably be in the $20 per hour range, and they were talking about a part-time position. Parker said if a grant writer worked on a CDBG grant which was then approved, the administrative costs would be paid by the grant.

See more from the city council meeting in Sunday's Alva Review-Courier. A video of the meeting may be seen at http://www.AlvaReviewCourier.com.