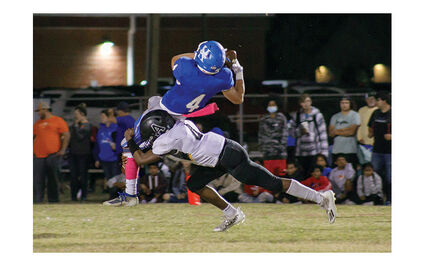 The Alva Goldbugs are battling for a fourth place slot in the Class 2A-1 football district, but their disappointing trip to Hennessey Friday didn't help their chances. Currently the top three district teams are Oklahoma Christian School (OCS), Perry and Luther. The fourth spot is still up for grabs.

The Goldbugs played Friday without senior quarterback Kaden Slater who is on the injured list. Slater was able to help the team with punting. Senior Kelton O'Neil and sophomore Daylon Malone rotated taking the snap of the football.

Junior Drake Wharton made two touchdowns and Malone had the third, but the Goldbugs lost to the Hennessey Eagles 33-18.

Alva won the toss and elected to receive the ball. From their 40 yard line, the Goldbugs made the first down on carries by Aiden Faison and Malone. Wharton carried the ball another six yards, and Malone added two. On the following play, Malone was tackled for a loss of. A false start on the fourth down set the Goldbugs back five yards. With a fourth down and nine to go, Slater came on the field to punt.

The Eagles began from their 29 yard line. Junior quarterback Sebastian Gonzalez was sacked by Alva's Hunter Miller for a loss of seven. The shaken-up Gonzalez left the field, and big senior Keigen Crites took the direct snap. He broke loose from the Goldbug defense and traveled the 77 yards to the end zone. Gonzalez came back for the kick that sailed through the uprights. Hennessey led 7-0 with nine minutes still on the clock.

Wharton took a direct snap and made a 12 yard run on the Alva possession. After that things fell apart, and Slater had to punt.

Hennessey was unable to make a first down and also had to punt.

With good field possession on the Hennessey 47, Malone took the snap and was sacked by Crites for a six yard loss. Two passes were incomplete, and Alva had to punt.

Starting on their 47 yard line, the Eagles slowly worked their way down the field, mainly on runs by Crites. One first down came from a Gonzalez pass to Seth Simunek. At the Alva 24, Gonzalez faked a handoff and passed to Weston Smith who took the ball to the 15. Gonzalez kept the ball, making it to within five yards of the goal. He gave the ball to Crites, but Miller stopped him for no gain and the first quarter ended with Hennessey 7, Alva 0.

On their second try from the five, the Eagles scored on a Crites rushing touchdown. Gonzalez's kick was blocked, and Hennessey led 13-0.

Freshman Demarkus Wharton had a good return on the kickoff for Alva, and big brother Drake Wharton rushed to get the ball to the Hennessey 38. O'Neil had to deal with a long snap but managed a pass to Malone for a one yard gain. Following an incomplete, O'Neil passed to Tyler Penco who was tackled for no gain. A flag on Alva for holding was declined. With nine yards to go, O'Neil handed off to Wharton who passed to Penco, but it was in and out of his hands.

At the Hennessey 38, Crites took the direct snap and attempted a pass that was nearly picked off by Malone. Gonzalez came in and gave the ball to Crites for the first down at mid-field. A pass to Smith gained eight yards, but an injury timeout was called for Hennessey's Tyler Trotter. He left but later returned to the game. On the next play, a holding call on the Eagles moved them back to the 49. Gonzalez threw an incomplete, but on the next try he connected with Simunek up the middle for a 51 yard passing touchdown. The kick was good, and Hennessey led 20-0.

From the Alva 23, the Goldbugs advanced two yards on an O'Neil pass to Tucker. A keeper by O'Neil finished the first down. Following an incomplete pass, O'Neil passed the ball to Malone who was tackled for no gain. Still at the Alva 33, O'Neil passed to Tucker who had a huge run to the Hennessey 12. O'Neil picked up a low snap and made it to the line of scrimmage before the tackle. Then he handed off to Wharton who eluded one defender and ran over another for the touchdown. Feely's kick failed to score, but Alva was on the board 20-6.

Hennessy began at their 20, and Gonzalez was sacked by Chris Carpenter and Payden Nusser for a five yard loss. The Eagles regained the five on a pass to Simunek, but on the third down Goldbug Lantz Mathers sacked Gonzalez, the ball came out and Alva recovered it.

The Goldbugs were on the Hennessey eight yard line. Malone dropped the ball on the snap, and Crites fell on it for the Eagles.

Starting at their 14, Hennessey made it to the 20 and had to punt.

The Goldbugs also had a short possession. O'Neil passed to Malone for six yards and handed off to Wharton for one. On the third play, O'Neil was tackled for a loss of two. With five yards to go, O'Neil passed to Phillip Randall, but the ball was tipped incomplete.

Hennessey took possession on their 27. They made it to the Alva 27, but Gonzalez was hit as he threw the ball which was caught out of bounds. Pass interference was called on Alva for half the distance to the goal. From the Alva 11, Gonzalez threw on the run to Langston Smith, but he was stopped short, and the clock ran out. At halftime, Hennessey led 20-6.

It was Hennessey's turn to take the kickoff. Feely's kick went deep, and Nykolaus Snyder returned it to the 25. Gonzalez handed the ball to Crites who was held to two yards by a Mathers tackle. Gonzalez pitched the ball out to Crites who gained four yards before Nusser and Randall took him down. As the Eagles lined up, Crites suddenly collapsed to the ground. He left the field, but soon recovered and returned. Meanwhile Gonzalez ran for the first down.

Hennessey continued to advance on a run by Snyder and passes to Smith and Snyder. At mid-field Gonzalez kept the ball and ran, but Mathers took him down for a two yard loss. There were flags after the play, and Alva was assessed a 15 yard penalty for unsportsmanlike conduct.

Now at the Alva 37, Gonzalez handed the ball to Crites who gained three yards. Then Gonzalez connected on a long pass to Snyder at the ten. Snyder ran across the goal line for a fourth Hennessey touchdown. The kick missed the uprights, and the Eagles led 26-6.

Demarkus Wharton had another great return on the kickoff, setting Alva up on the 50 yard line. A holding call on the first play set Alva back to their 42. After a Malone keeper, Wharton had a nice run for a first down, but it was offset by a holding penalty. Malone tried a keeper but only made it to the line of scrimmage. A handoff to Faison gained nine yards. Then Malone found a route up the middle and ran for the first down.

At the Hennessey 25, Wharton was tackled for a two yard loss, but Malone gained four on a carry. Malone carried again for the first down to the 10 yard line. From there, Malone slipped into the end zone. The two-point conversion failed, but the score was now Hennessey 26, Alva 12.

Hennessey took over and steadily worked their way forward. At the Alva 37, Gonzalez handed off to Crites. In the tackle, Crites helmet came off and Alva was flagged for a facemask penalty. That put the Eagles on the Alva 20. From there Gonzalez passed to a wide-open Simunek for the touchdown. The extra point kick was good, and Hennessey was up 33-12.

Alva had time for three plays before the quarter ended.

Opening the final period, Alva made little progress and had to punt.

Hennessey started at their 47. A holding call set them back, and they only managed to make it back to the 47 before having to punt.

At the Alva 26, Malone kept the ball for a six yard gain. A false start penalty erased much of that. Hennessey held the Goldbugs to no gain on the next play, but Wharton ran for the first down. At the 38, Malone gave the ball to Faison who threw it to Randall who couldn't hold onto it. There was a third injury timeout for a Hennessey player who eventually returned. Malone had a big first down run to the Hennessey 47. He connected with Randall on a pass to gain five. After a one yard loss, Wharton ran for the first down.

Now at the Hennessey 34, Faison ran for six. Malone's keeper lost three yards, but another Hennessey player limped off the field. On the next play O'Neil took the snap and was sacked by Snyder for a loss of five. From the 35, O'Neil threw to Randall who threw the ball to Wharton who ran it in for the touchdown. The two-point conversion failed. The score was now Hennessey 33, Alva 18.

The Goldbugs held Hennessey to only two yards of gain on their next possession and they had to punt.

Alva moved the ball from their 21 to the 40 on a nice pass from O'Neil to Malone. A pass to Tucker gained six more. O'Neil's next pass popped out of Randall's hands, but Malone managed to catch it. At the Hennessey 40, Wharton threw a pass that was intercepted at the 15 by Zack Tillman. 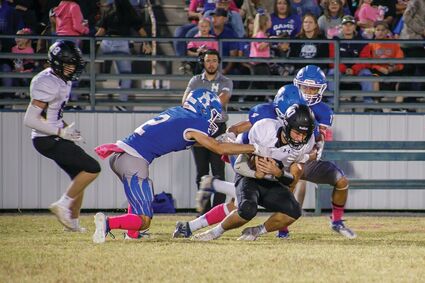 Alva's Kelton O'Neil (10) gained yards before being taken down by the Hennessey defense.

With a little under 5 minutes to play, Hennessey started slowing down the action. On their final play, Gonzalez's handoff to Crites was fumbled, but Crites fell on it and the clock ran down. The score remained Hennessey 33, Alva 18.

With the loss, the Alva Goldbugs drop to 1-4 in the district while Hennessey has a 3-2 district record. Next Friday the Goldbugs will host Blackwell for their last home game of the season. Kickoff will be at 7 p.m. at Ranger Field. Friday will be senior night for Alva.

In this area, Waynoka continues to win, shutting out Corn Bible Academy 46-0. The Timberlake Tigers also had a good night, beating Wesleyan Christian 60-8.