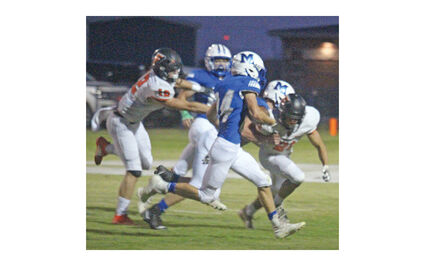 The 6 and 0 Mooreland Bearcats met the 7 and 0 Fairview Yellow Jackets last Friday night in Mooreland. Fairview walked away with another win, and Mooreland is now 6 and 1. 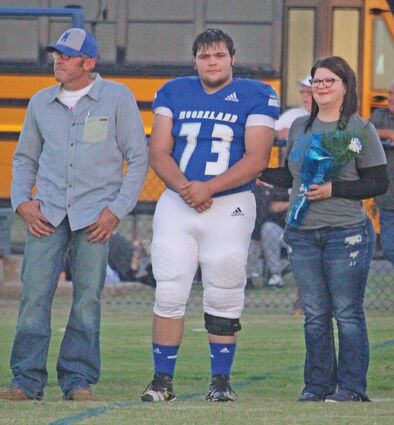 Shane Morris, Duke Morris and Boker Morris pose for a picture during "Senior Night" prior to the Mooreland football game against Fairview. There was a total of 14 Seniors with their parents on the field. Duke Morris is a Freedom student who plays on the Mooreland team. Morris has played for four years as a Bearcat; Freedom has co-oped with Mooreland for several years.

The Yellow Jackets scored within the first two minutes after starting their first drive on their 30-yard line. The Bearcats also scored later in the quarter. This happened when Stetson Roper (No. 24) recovered a fumbled punt. The Bearcats moved the ball down field and on first and ten on the three yard line Roper scored 6; the 2-point conversion was no good. At the end of the first quarter it was Fairview 7 – Mooreland 6.

It was all Yellow Jackets in the second quarter as they easily scored three more touchdowns. At half time it was Mooreland 6 and Fairview 28.

Fumbles plagued the Bearcats in the second half, and the Yellow Jackets capitalized on two of them bringing their total to 42. The Bearcats scored two more times late in the fourth quarter. The final score was Fairview 42; Mooreland 20. Mooreland's record is 4-1 for their league and 6-1 overall. Their next game is Friday, Oct. 29, at Hooker (7-0) beginning at 7 p.m.