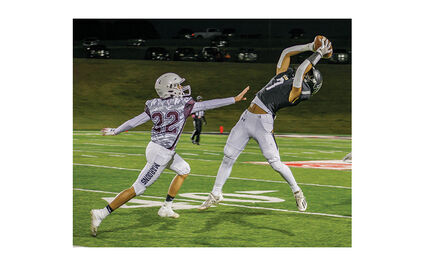 Sophomore Daylon Malone (7) stretches back to catch the pass thrown to him by Kaden Slater.

Twelve football seniors were honored Friday night on Ranger Field in Alva. With a district record of 1-4, the Alva Goldbugs were ready for a victory. If the Alva team could defeat Blackwell and Hennessey lost to OCS, there was still a chance the Goldbugs could secure the fourth spot in district playoffs.

With a freshman quarterback, the Blackwell Maroons mainly stuck to a running game. Neither team scored in the first quarter. The Goldbugs got on the scoreboard about halfway through the second period to lead 7-0 at the half. In the third quarter, the Alva defense put on the stops while the offense ramped up their game. Alva led 21-0 at the end of the third, and added two more TD's in the fourth for a final of Alva 34, Blackwell 0.

Alva won the coin toss and deferred with Blackwell taking possession of the ball. The Maroon offense consisted mostly of freshman quarterback Kruz Goff and senior running back Christian Mora. The two of them advanced the ball from their 23 yard line all the way to the Alva 23 where the Goldbugs piled on Goff for a loss. Their fourth attempt was short by two yards, and the Goldbugs took over.

Alva began at their 22 and moved to the 39 before getting into trouble. A holding call pushed them back 15 yards. Slater's pass to Tucker drew another flag which was declined since Alva would obviously have to punt anyway.

At the Blackwell 30, Goff gave the ball to Mora who made only two yards. Goff's keeper added eight for the first down. After carrying the ball four yards, Goff was hit for a loss of three by Keaton Lewis. Then the Maroons were penalized for delay of the game. On a third down with 14 yards to go, Goff was sacked for a loss of ten, and Blackwell had to punt.

At mid-field the Goldbugs had time for one play before the scoreless quarter ended.

To start the second period, sophomore Daylon Malone stepped in for a few plays at quarterback. He kept the ball and ran seven yards for the first down. After a couple of handoffs to Wharton, Alva still had five yards to cover. Slater sailed a pass into the hands of Tucker who made it within a yard or two of the end zone. Unfortunately, the spectacular play was negated by an Alva holding penalty in the backfield. Kelton O'Neil was unable to haul in Slater's next pass, and Alva had to punt.

Starting at the Blackwell 13, Goff took a low snap and was sacked by Goldbug Phillip Randall for a loss. Goff carried the ball twice but only advanced to the 15 where the Maroons had to punt.

Malone ran back the punt, and Alva had great field position at the Blackwell 29. Malone took the quarterback spot again. His first two carries went nowhere and the third gained only one. Slater took over, but an illegal procedure call moved the Goldbugs back five yards. Now at the 31, Slater passed the ball to Malone who caught it over his shoulder at the one. From there, it was a short run for Slater to cross the goal line. Feely's kick was good, and Alva led 7-0 with just under six minutes left.

Blackwell started at their 28, advancing to 49 before they had to punt. Their progress was helped by a penalty on Alva for illegal movement. A little later the Maroons drew a flag for holding and couldn't make up the yardage.

The Goldbugs took over at their 20. Slater's pass to Tucker ate up 17 yards for the first down. A pass to Wharton lost five, and two incomplete passes meant Slater had to punt.

With less than a minute to go, Blackwell made two plays before the clock ran out. Alva led 7-0 going into the halftime break.

It was the Goldbugs' turn to take the kickoff in the third. Starting at the 22, Slater passed to Malone for nine yards and handed off to Wharton for the first down. As Wharton was tackled the ball came out, but Alva fell on it. After another pass to Malone went nowhere, Slater tried to find running room. Instead he was sacked for a seven yard loss. On the third down with 17 yards to go at the Alva 26, Slater passed the ball to Wharton who broke free for a huge run of 46 yards to the Blackwell 22.

Slater ran the ball for a two-yard gain. He tried a pass to Kyler Penco in the end zone but it was incomplete. Another pass attempt to O'Neil was incomplete but there were two flags. The Maroons were called for pass interference, and Alva drew a personal foul for offsetting penalties. Slater then passed to Tucker right over the middle for the touchdown. Feely's kick went through the uprights, and Alva led 14-0.

Blackwell had decent field position on their 38 but couldn't make any progress. Goff's keeper gained only two before he was hauled down by Chris Carpenter. Another Goff run gained two more. Goff gave the ball to Mora who ran for the first down, but a holding call on Blackwell moved the ball back to the 32. Goff tried a pass, but Malone knocked it away. The Maroons had to punt.

At the Alva 36, Slater gave the football to Wharton who made 12 yards for the first down. Wharton carried for another four yards. At the Blackwell 48, Wharton took the ball to the 32 with Allie Pollock clearing the way. Another rushing carry by Wharton put Alva on the 17. Slater faked another handoff to Wharton but kept the ball instead and ran across the goal line. Feely's point-after kick was good, and Alva led 21-0.

The Maroons began on their 35. Goff kept the ball and was tackled by Lewis for a loss of two. A handoff to Mora lost another yard. Goff tried a pass, but it was incomplete, and Blackwell had to punt.

At their 34, the Goldbugs were set back by a delay of game penalty. After two plays with no gin, Slater kept the ball for an eight yard run. Slater set up to kick but Alva was flagged for a false start. Slater tried again and successfully punted the ball which took a good Alva roll.

Starting at their 18, Goff was immediately hit for a loss of three. On the next play, Hunter Miller sacked Goff. With seconds left in the quarter and 16 yards to go, Goff tried a pass which Drew Glass almost picked off. The third period came to an end with Alva up 21-0.

The Maroons punted to begin the fourth quarter, putting Alva in great field position at their 41. Wharton gained six yards, and a Slater pass to Malone finished the first down. Now in Blackwell territory at the 48, Slater passed to Tucker for five yards and handed off to Wharton for the first down. A nine-yard carry by Wharton put Alva on the 19, and movement by Blackwell finished the first down to put them at the 14. Slater gave the ball to Wharton who powered his way to within two yards of the goal line. From there, Slater ran in for the touchdown. Feely's kick scored, and Alva led 28-0.

At the Alva 30, Slater gave the ball to Wharton who took off. He powered his way down the field, breaking tackles, and crossed into pay-dirt on a 70 yard touchdown run. Feely set up to kick, but the snap went over the head of Glass, and Feely had to fall on it. Alva now led 34-0.

With the win secured, Coach Dave Foster started sending in freshmen players for some experience. Blackwell changed out quarterbacks with Kevin Rios taking that spot. He was immediately sacked for a loss of one. Rios tried two passes, both incomplete, and had to punt.

Alva freshman quarterback Cambell Gaisford took the snap at the 40 but lost two yards. He gave the ball to Demarkus Wharton who lost another yard on the play. Gaisford was more successful on a keeper, gaining five. With eight yards to go, Slater came in to punt the ball. 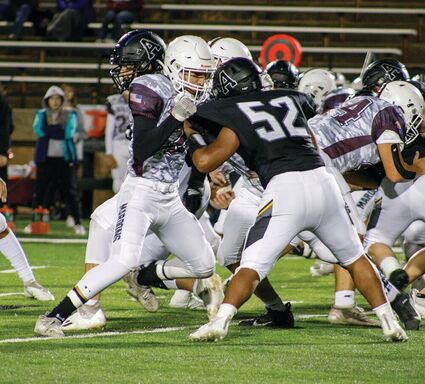 Senior Christopher Carpenter (52) tries to stop the Blackwell defense from getting through.

Blackwell fumbled the punt, and Alva regained possession. At the Blackwell 34, Gaisford gave the ball to Demarkus Wharton who ran for eight yards. Another handoff to Wharton gained one more. Gaisford kept the ball to finish the first down before time ran out. The final score was Alva 34, Blackwell 0.

The win gives Alva a district record of 2-4 and an overall record of 3-6. It also improved the Goldbug chances of securing the fourth spot in district playoffs.

Next Friday in the final game of the regular season, Alva will travel to north Enid to take on the Chisholm Longhorns with a 7 p.m. kickoff. Chisholm lost to Newkirk 28-20 this week.