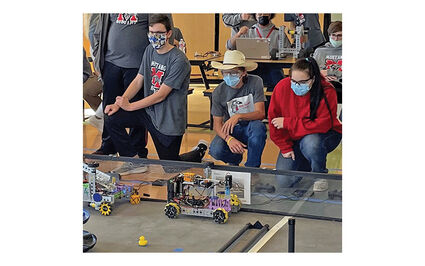 The Freedom Talon's compete at the team's first match at Bridge Creek. Andy Townsend (wearing a cowboy hat) and Jaci Weber (next to him in the red sweatshirt) team up in one round of the competition. 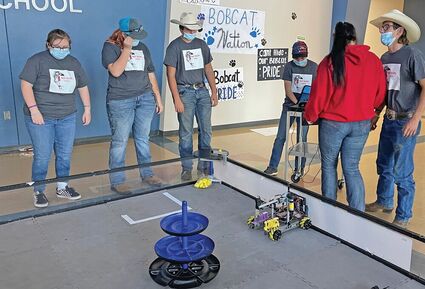 During a robotics meet, the students must have an autonomous game that has to be pre-programmed. For the first 30 seconds the robot must execute the pre-programmed movement to score as many points as possible. At the end of those 30 seconds the students are able to pick up the robot's controllers and continue the game attempting to score more points. During a match the team is paired up with another team and the two robots have to work together to score as many points as possible against the other alliance.

Regardless of how prepared the students are before the match, something can always go wrong with the programming or the mechanical aspect of the robot. The Talons had a few minor setbacks during the day. The programming was just a little off when they first arrived because of the difference between Freedom's course and the regulation course.

Before the Talons' first match the students re-programmed the autonomous period so that they were able to score points. Another setback was when the Talons' control hub for the robot was dead during the last match.

Despite all the challenges, the Iron Talons achieved sixth rank for this first tournament.