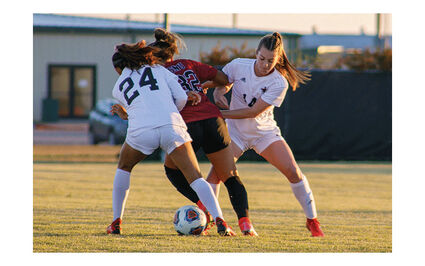 Cynthia Armas (24) and Sydne Edmison (14) team up to get the ball away from Southern Nazarene.

Alva, Okla. – The Rangers Soccer team hosted the Crimson Storm of Southern Nazarene for the last home game of the season. The team finished the game with a 3-0 win over the Storm. The Rangers scored in the opening half and took advantage of the early lead before winning 3-0 to close out the game.

A variety of Ranger players had a glance with a shot on target. Tiara Campbell led the Rangers with eight shots, four being on target an...