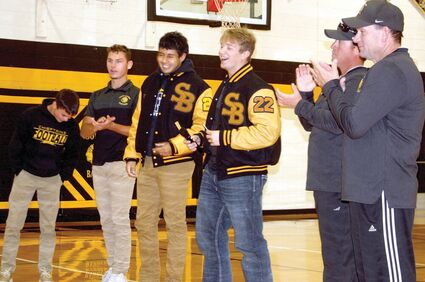 Both No. 1 seeds in the Kansas 8-man Division II Playoffs, both with a 9-1 record, the South Barber Chieftains and the Wheatland-Grinnell Thunderhawks will face off on the gridiron in Kiowa Friday at 5:30 p.m. The game is for the sectional championship or quarterfinals for state.

Last Friday night the Chieftains became regional champions after beating Norwich 20-12. In the second game of their regular season South Barber lost by two points to Norwich. At the pep rally held that afternoon of the playoff game Chieftain Head Coach Matt Cantrell said that game was all about "redemption." He told the crowd of Chieftain fans they were "prepared" and this was an "opportunity," which they seized.

"Our defense was phenomenal," Coach Cantrell said. "It was great to see that kind of effort. It was a very physical game." He added, "Norwich was a strong running team. They had 46 yards rushing. It was a heck of a defensive game. Norwich has one of the best defenses in the state."

Looking forward to Friday, Cantrell said Wheatland-Grinnell "has a good quarterback who has over 1000 passing yards this season. This will probably be the best passing attack we'll see this year by far. I think we'll match up well. They are not as big as Norwich. I'm excited – I think there is a good chance we can win," Cantrell said.

Referring to the stadium full of Chieftain fans Friday night, Cantrell said, "Oh wow! We had an unbelievable crowd and support. You don't know how much the team appreciates that. They feel that crowd noise!"

The town will celebrate the Chieftains at a bonfire Wednesday night at 7:30. It will be just south of the Thurman building.

If the Chieftains win Friday, they will play the winner of Dighton and Victoria. Cantrell said that game would be on the road.