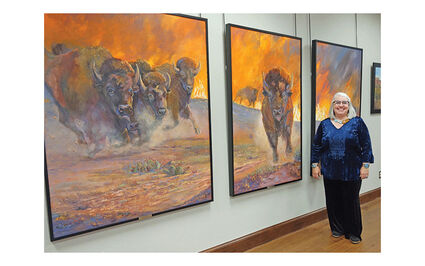 The Survivors Mural, a five panel painting of buffalo running from a prairie fire, is on display this month at Graceful Arts Gallery in Alva. Artist Dallas Mayer of Hooker spent three months painting the mural which previously hung in the Amarillow airport.

The massive five-piece Survivors Mural by Dallas Mayer is the centerpiece of the display at Graceful Arts Gallery in Alva this month. Mayer is from Hooker, located near Guymon in the Oklahoma Panhandle. She has a gallery and studio on Main Street and invites everyone to visit her there.

Mayer describes how the mural came about. The Amarillo Arts Commission asked her to be the featured artist at the Amarillo airport. She knew she wanted something with a "wow" factor that people would notice "as they are scurrying by trying to get to their plane or get to their family."

"I love to paint bison or buffalo and have been to several different ranches," Mayer said. She has studied the anatomy of the buffalo and decided to paint them running from a prairie fire.

Mayer has experience with prairie fires. "Our ranch has been burned," she said. "I was down at Canadian, Texas, at the museum during that when they had that big fire. I had my show after that fire, and they lost several young kids. It was on my mind."

She decided that would make people stop and think, "Oh my gosh! Look at that!"

Like the Oklahoma Panhandle, the Texas Panhandle is "just alive with history of the buffalo hunters and the Red River wars," she said. Her husband does reenactments of the Texas buffalo hunter Billy Dixon. "So buffalo were on my mind."

First Mayer decided to paint a 24x48 inch prototype of what she wanted to put on the wall. "This 24x48 piece took me about three weeks, and I did a lot of drawing, a lot of sketching trying to figure out how they move their legs," she said.

When she finished the painting, she took it to her mentor Jack Sorenson. She proudly announced that Sorenson was just voted into the Cowboy Artists of American on Nov. 4. Mayer said she's known Sorenson for 42 years. "He and I started with the same art teacher, Dord Fitz," she said.

Sorenson helped her with the movement of the legs and "mentored me through that piece," she said.

Then Mayer had to decide how big to make the final painting. She went to the airport and measured the wall she described as "huge." She had to make her painting bigger, much bigger.

Mayer looked at canvas sizes and liked the linen canvases that came in 3 ft. by 5 ft. size. She decided on five panels with the center being 4 ft. by 5 ft. Only two of the panels feature her original prototype. Two of the outer panels on one side and one on the other end were added. She says the panel depicting a frightened buffalo calf is her favorite. This time it took her three months to finish the paintings.

"All kinds of people have seen that mural," she said. "It's just amazing! People will call me up when they're standing in front of it or they'll message me on Facebook and say, 'Oh my gosh, I didn't know your art was at the airport.'"

The whole experience was "quite a feather in my cap," said Mayer. Instead of being displayed nine months, her mural hung at the Amarillo airport for a year and four months due to Covid.

Mayer explained her pricing. She charges $2.65 per square inch. She measured the five canvases and came up with the final price. "But the price is negotiable, and it's definitely for sale," she said. "You know I'm an artist so I like to sell my work."

As a featured artist at Graceful Arts Gallery in Alva, Mayer's work including the mural will be displayed this month. This is the first time the mural has been on display since being removed from the airport.