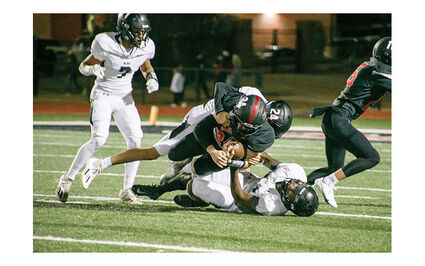 The Knights had first possession and capitalized on that in seven plays with a touchdown. Quarterback Drew Wood passed to Logan McGowan for the 26 yard TD. The extra point kick by Matthew Joliff was good, and Crossings led 7-0.

The Goldbugs moved the ball from their 32 to the Knights' 40 yard line. The Goldbugs had to fight for every yard with the best progress on a pass from Kaden Slater to Phillip Randall for 12 yards. When the drive stalled, Alva had to punt.

On their next possession, Crossings Christian fumbled a pass catch, and Daylon Malone fell on it to give Alva the ball. The Goldbugs' drive from their 15 stalled out again at the Crossings' 40. A fake on the punt didn't work, and the Knights took over.

At the Alva 38, Wood gave the ball to Silas Ward who made it to the 25. From there Wood passed to McGowan for the touchdown. The kick was good, and the Knights led 14-0 at the end of the first period.

Alva was moving the ball well as the second quarter began. At the Alva 47, Slater connected with Weston Tucker on a long pass, setting up the Goldbugs within 24 yards of the goal. Then Slater's pass to Malone in the end zone was picked off by the Knights.

Crossings Christian covered 80 yards in four plays to score on a pass from Wood to Justin Walraven. The kick was good, and Crossings led 21-0.

A deep kick put Alva at their seven yard line. A run by Slater lost a yard. Kelton O'Neil caught a short pass to regain the yard. After an incomplete pass, Alva had to punt. A false start on the Goldbugs moved them back to the four, and the low line drive punt went no farther than the Alva 25.

After two plays, the Knights had covered nine yards. Wood handed off to Ward and he disappeared under a Goldbug pile for no gain. After an incomplete pass, Alva took possession at their 16.

On the third play, the snap went over Slater's head and back to the goal line. A Knight fell on it, scoring the touchdown. The extra point missed, but Crossings now led 27-0.

Alva's next possession went nowhere, and the Knights took over at their 45. Despite a penalty on the Knights for taunting and a Logan Nusser tackle for a six yard loss, the Knights relentlessly moved down the field. A pass from Wood to Mason Snyder put them two yards from the goal. Wood passed to McGowan for the touchdown. The extra point kick by Joliff was good, and Crossings Christian led 34-0.

Again the Goldbugs couldn't make the yards and had to punt.

This time it took three plays for the Knights to score. Wood passed to McGowan who was wide open and covered the 66 yards to the goal. The kick was good, and Crossings led 41-0 going into halftime.

With only one successful pass from Slater to Malone for three yards, the Goldbugs had to punt.

From their 29, the Knights moved to the 41 where Wood handed the ball to Ward. He cut right, then left and found an open path down the right side to score the 59 yard rushing touchdown. The Joliff kick was good, and Crossings Christian led 48-0.

It was agreed to keep the clock running to speed up the game. Alva moved from their 31 to the Crossings 29 yard line with a couple of good runs by Slater and a 13 yard pass to Drake Wharton. Slater passed to O'Neil for the 29 yard touchdown. O'Neil was hit near the goal line but reached across for the score. On the kick attempt, a bad snap was grabbed by Drew Glass who tried to run with it. He was stopped short of scoring. Alva now had six points.

At the Knights' 28, sophomore quarterback Nate Rouse handed the ball to Payton Brady three times. On the third handoff, the ball was fumbled, and Allie Pollock grabbed it. He ran to the Crossings' six yard line before being stopped.

Slater was sacked for a loss back to the 10, but he passed the ball to Malone who scored the touchdown. Jackson Feely's extra point kick was good, and the score was now Crossings Christian 48-Alva 13. The Knights managed to move from their 20 to their 47 before the quarter ended.

As the fourth period opened, the Crossings Christian drive stalled at midfield, and they had to punt.

Taking over at their 34 with about 9 minutes left, the Goldbugs worked their way to the 35. A pass by Slater was intercepted by Fischer Roby, and the Knights' had possession on their six yard line.

A penalty for illegal substitution move the Knights back to the three. They lost two yards on a running play and gained one back on a pass. Set up at the two yard line, Rouse gave the ball to Brady who was tackled in the end zone by Lance Mathers, scoring an Alva safety. The score was now 48-15. 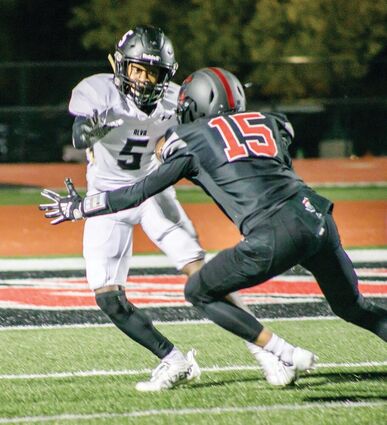 Demarkus Wharton (5) looks for a way to dodge the Knight defense.

At the Alva 47, Slater passed to Wharton who found some space along the sideline, running the 53 yards for the touchdown. Feely's kick was good, and score was 48-22 in the Knights' favor.

Each of the teams had one more possession. The final play was a pass from Slater at the Alva 39 to Malone at the Crossings' 25.

In Class C first round playoffs, Timberlake shutout Oaks 54-0, and Waynoka blanked Temple 46-0. Class B Cherokee's season ended with a 54-8 loss to Laverne.