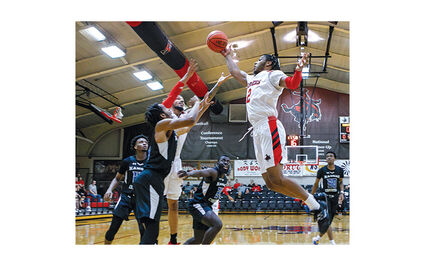 Northwestern forward Larry White (2) goes up and gets the rebound.

Alva, Okla. – Northwestern Oklahoma State men's basketball team hosted their home opener Monday evening with a non-conference game against Kansas Christian College. The Rangers used a dominating first half from a 26 points lead after hitting eight first-half threes. The Red-and-Black would go on to win the game by 27 points 99-72 Monday evening behind a spread-out offensive attack.

The Rangers' offense was led by Jason Douglas-Stanley, finishing with a team-high 15 points as one of seven players in double figures. Bubba Furlong finished with 14 points on seven of nine shooting, followed by Anthony Jones with 13 points, Larry White with 12, Malik Parsons with 11 and Brian Free, and Ravel Moody with ten each in Monday's win. White and Furlong had game-highs of 13 rebounds each, followed by Free and Smith with four each to lead the rebounding for Northwestern. Furlong led the Rangers in assists with five, followed by Free with three.

"I am really proud of this group of players, they continue to progress as a team as we continue to learn and get to know each other. We have many players that could be starting on this team, players on the bench continue to step up and earn minutes off the bench that step up earning minutes. There were spurts throughout the game we were really moving the ball offensively as we turn that into consistent shots," said head coach Vinay Patel on 105.7 KRDR radio after the Rangers win.

Kansas Christian scored the first points of the game before the Rangers' offense answered back and the teams traded points early in the opening half. A Parsons three-pointer tied the game at 5-5. With Northwestern trailing 7-5, the Rangers made a quick push forcing two turnovers to start a 9-0 run to take a 14-5 lead, as Furlong got the scoring started on the run.

Douglas-Stanley buried his first three of the game to push the Rangers to the nine-point lead. A Moody layup pushed the Rangers to their first double-digit lead of the game at 21-10 halfway through the opening half. Northwestern's defense continued to put pressure onto the Falcons, forcing three more turnovers to that point in the half.

The Red-and-Black forced ten first-half turnovers while shooting 58.5 percent from the field to help gain the halftime advantage. The Rangers continued to dominate in the second half, forcing another ten turnovers in the second half and outsourcing the Falcons by one. 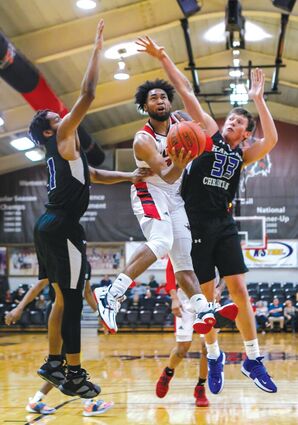 Northwestern guard Jason Douglas-Stanley (20) is determined to make it to the basket.

Parsons scored the opening basket of the second half on a layup assisted by Free. The Rangers opened the second half on a 6-0 run to open their first 30-point lead of the game after a Parsons foul shot forced an early second-half timeout from the Falcons. Northwestern pushed their largest lead by 36 points at 73-37 following a Bubba Furlong layup capping a 15-5 run, with Douglas-Stanley scoring five of those points. This was followed by the Falcons' best run of the game after Jahreese Jordan and Christian Pineda sparked a 21-6 run, each scoring six points on the run to bring the Rangers lead down to 79-58 just under the halfway point of the second half.

The teams began to battle once again, trading basket for basket for the next three minutes of the half, with the Rangers holding the 21-point lead following two Free foul shots to make the game 86-65 with five minutes to play.

Those foul shots would sparked the last Ranger run, pushing the score to 99-69, getting it back to 30 before a Falcon buzzer-beater put the game's final score at 99-72.

The Northwestern victory improves the team's record to 2-1 on the season, with a 1-0 home record. The Rangers will be back in action on Saturday, Nov. 20, against Manhattan Christian with a 4 p.m. tip-off.