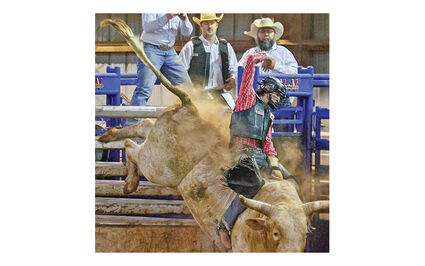 Cameron Marston of Helton, Kansas, and his bull kick up a little dust during the Alva Bull Battle in April 2021.

One of the biggest open bull riding events in Oklahoma is scheduled for April 2022 in Alva. While he was a senior in high school in 2007, Justin Dowdy of Alva put together his first bull riding event. Since then, it has become bigger and better.

On Wednesday, Dowdy spoke about the upcoming Bull Battle VI set for Friday and Saturday, April 1-2, 2022, in Alva. He was at the City of Alva Tourism Tax Committee meeting to seek funds to help with the production. Last year the Western Sports Committee (WSC) LLC was granted $30,601 for the Bull Battle. This year Dowdy asked for $37,062.80.

Beginning as a one-night event, the Bull Battle has expanded to two days with two youth mini-bull riding rounds and two adult bull riding rounds. Saturday concludes with a dance. This year the annual Ball-Nanza Calf Fry will be held in conjunction with the bull riding on Saturday at 4 p.m.

Dowdy said the one-day youth bull riding in 2021 attracted 40 to 45 entries. The stock contractor believes they can draw 60 to 75 kids for a two-day event. The age cut-off this year was 15, but Dowdy said the contractor will bring bulls suitable for ages 3 to 19 next April. There will be five age groups.

The Bull Battle attracts high quality riders from all over due to the $10,000 added money, said Dowdy. Last year's winner was a Brazilian. The event is sanctioned by the Bull Riders Inc. (BRI) and the World Championship Miniature Bull Riding Association (WCMB). The show attracts contestants from all over Oklahoma as well as Texas, Kansas, Arkansas, Colorado, Missouri and Nebraska as well as Brazil and Australia.

Tourism Tax Chairman Norville Ritter asked why the costs for the 2022 event are as much as 20 percent higher. Dowdy said a large part of it is the cost for the specialized chutes. The companies providing the arena and back pens equipment lost money when events were canceled due to Covid. They are now trying to make up for those losses.

Dowdy said he's checked with other suppliers but the company he uses out of Attica, Kansas, appears to be the best choice because of price and the shorter distance for trucking. Other equipment is located in Ohio. 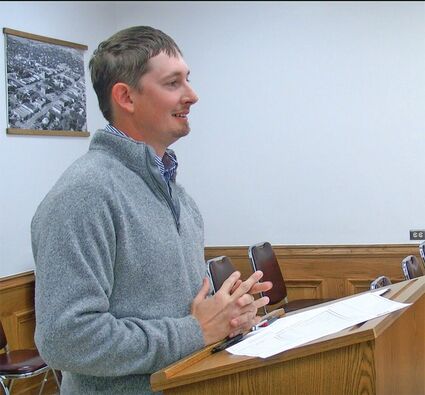 Although committee members were enthusiastic about the event, they expressed concern about the higher amount asked. This is one of the largest grant requests they receive. Terri Parsons suggested a compromise of half the difference between the 2021 grant and the new request. She made a motion to grant the event $33,831. Dr. Charles Tucker seconded, and the motion was approved unanimously.

At the beginning of the meeting, the committee approved minutes of the last meeting. They looked over and approved the financial reports for September and October. Alva Chamber Executive Director Jodie Bradford said the committee had $412,165.14 in tourism tax collections available for grants.

During the remarks section of the agenda, Ritter noted that the fourth quarter collections showed "a pretty good improvement." He said that was the time period of the Big Cruise and some other events in Alva.