Encouraging tourism in the area 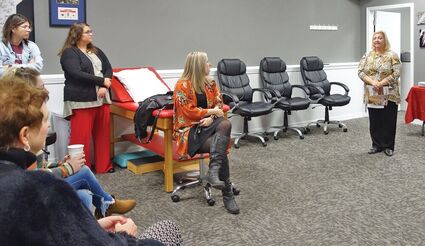 Jerrad Hada, owner of Ignite Physical Therapy, welcomed guests to his business for the Alva Chamber Community Coffee Friday morning. Hada said he purchased the Human Performance Center about three years ago. Then he had the opportunity to buy the former Brown's Shoe Fit Building downtown. After remodeling, he moved his business to 520 Flynn about two and one-half years ago.

Burdick said Alva has "a big spot in my heart." About 20 years ago when her son was 13, he was invited to participate in a ball team in Alva. They needed an extra player. Burdick said that team went to Omaha and won the Little League World Series. Her son went to school in Alva, played baseball here, and lived and worked in Alva until the July when he moved to Enid. "My grandbaby was here so, yeah, I've been here quite a bit," she said.

"Probably the easiest way to describe it (Red Carpet Country) is we work from Boise City to Ponca City," said Burdick. The region got its name when Gov. George Nigh was the lieutenant governor and divided the state into regions. Burdick said the explanations she's heard about the name was that it came from the red dirt and the panhandle is like rolling out the red carpet to the rest of the state.

The Red Carpet Country board includes a representative from each of the 16 counties, and Chamber Director Bradford is the one from Woods County.

Red Carpet Country produces an annual guide which is distributed for a full year. It is designed to help people become familiar with the area. One of the first things Burdick did in her job with Red Carpet Country was to design an attraction map. Each year she goes a show in McAllen, Texas, where she sees a lot of winter snowbirds. "They all have to come back this way," she said. The map has proved very popular.

Currently she is working on a Chisholm Trail guide she hopes will be similar to the Route 66 road trip. It will include other parts of Oklahoma in addition to Red Carpet Country.

Her office is also producing a barn quilt guide that she says is "a great way to get people in the community." Barn quilts are signs made on a special wood with special paint and depict colorful quilt squares. While barn quilts have been around a long time, they have recently become popular in Oklahoma.

Burdick said a lot of people will go on bus tours that travel around to see the barn quilts. And when they travel, they need places to stay and to eat. She suggested those who see "pretty barns" to encourage their owners to put barn quilts on their barns "so we can use this as an avenue to get people out here."

When thinking of events and other new things, Burdick said communities should look at what they already have and embrace history. "I love the fact that you've still got a downtown square and so much of it is historic," she said. Alva has a lot to offer, being in the center of a couple of state parks with plenty of lodging. Alva also has a movie theatre and attractions in the area like Bradt's Menagerie.

She reminded listeners that tourism is the third largest business in the state. "If we didn't have the tourism industry, each household in Oklahoma would be charged another $470 in taxes," she said.

A video of the Community Coffee may be seen at http://www.AlvaReviewCourier.com.