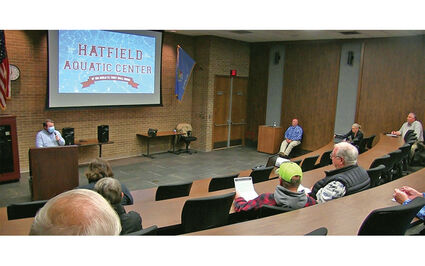 A hearing on the Hatfield Aquatic Center was held Thursday, Nov. 18, at Northwest Technology Center in Alva. Numerous public hearings have been held since the Alva Swimming Pool was closed in August 2018 by the state health department due to safety concerns. The main reason for this hearing was to meet requirements for applying for funding to build a new pool or aquatic center.

Blake Jordan, chairman of the committee named to pursue pool funding, presented a brief history of the swimming pool and the problems making it unsafe. The large swimming pool was built by the WPA in 1939. After being closed in 2018, several hearings were held and a survey was conducted to determine what Alva citizens wanted to do.

In August 2019, a bond issue election with bonds to be repaid through ad valorem (property) tax was defeated. The bond issue was to provide funds to pay off a low interest loan through a federal program.

In December 2020 an engineering firm, Lamp Rynearson, did a detailed survey of the swimming pool and bathhouse. Engineers determined the best option was to preserve some historic structures of the bathhouse and gazebo while totally replacing the swimming pool itself. In August 2021 an architect, Barrett L. Williamson, also surveyed the pool and gave a report.

Jordan said the pool committee is applying for a Section 106 Review to seek historic preservation status for the swimming pool. It is hoped this will make it possible to apply for more grants.

Meanwhile the committee is working on one of the more comprehensive grants available. They are seeking a grant from the Land and Water Conservation Fund. This is funded by the National Park Service for outdoor recreational facilities.

This grant would be a reimbursable 50/50 matching grant which means it would pay half of the cost while local funding would be required for the other half. The committee is currently working with a grant consultant who has experience with these applications. The next application deadline is the end of September 2022. Funds to pay for half of pool facility would need to be raised before the city could be awarded the grant.

Published on Nov. 7, a legal notice requested qualifications and proposals from firms to start the architectural and engineering process for the aquatic center. The deadline to respond is Nov. 30. The committee and the city would then choose a firm that best met the qualifications. A few firms have already been in contact.

Jordan said to start this process, a budget had to be developed using information gathered by the previous swimming pool task force. The original estimated cost of the project was $3.8 million. Since that time inflation and higher material costs have significantly increased the price. A 15 percent inflation and materials cost was added to make the new total $4,370,000. That was rounded up to $4.5 million as the "best guess" cost.

Barton explained this hearing was different from past meetings in that it fulfills a requirement for the Land and Water Conservation Fund grant. That's also why those attending were asked to sign in, a legal notice was placed in the local paper and there was an Alva mailing.

He asked that comments be limited to three minutes in length and listed three sections for the comments:

• What do you want the pool to look like? He suggested answers such as slides, more shade areas, a kiddie pool.

• How do you think the pool should be used? Barton illustrated this as water aerobics, swimming lesson, night swims or movie nights.

• How do we pay for it? Some ideas offered were private donations, grants or funding by citizens through the city in sales tax, property tax or an increase in fees.

Barton introduced Jeff McAlpin, an instructor at NWOSU, as the moderator for the discussion.

Discussion on what should be included in the aquatic center included more variety of fun things for kids and a desire to keep historical aspects of the pool. Although Allen Wilson expressed fond memories of the high dive, it seemed unlikely that would be feature of a new pool due to safety concerns. Adam Jordan said he'd like to have a section that was open when the pool was not like a splash pad. Alyson Penco said the addition of an indoor pool area would provide more use throughout the year.

In addition to the ideas Barton mentioned, audience members discussed swim competitions for kids like those in Barber County, Kansas. That brought up other competitive ideas like duct tape boats. Kathy Earnest remembered a teacher holding off-season lessons in canoeing at the old swimming pool.

Regarding funding there were suggestions for holding some fundraisers. Woods County Assessor Renetta Benson said when it comes to taxes a lot of people are against a property tax for Alva residents because people who live outside the city limits also use the pool. They prefer something like a sales tax that everybody pays. Tom Crenshaw asked about including the pool with the Alva Recreation Complex which already receives sales tax funding. There was also a suggestion about soliciting a large donation for naming rights. Another option suggested was involvement in Bank It.

The formal meeting closed, but the committee members stayed around to talk informally with participants.