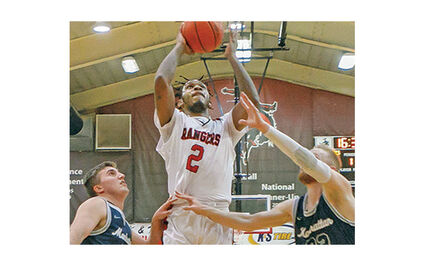 Northwestern forward Larry White takes to the air at the basket Saturday in Alva. He led the Rangers with 18 points in the 96-76 victory over the Manhattan Thunder.

ALVA, Okla. – Northwestern Oklahoma State Rangers hosted the Thunder of Manhattan Christian last Saturday afternoon. The season has taken off; the Rangers are on a three-game winning streak as they pulled off a 96-76 win over the Thunder. The Rangers took over the game from a late second-half run to close the game strong.

Northwestern was led by Larry White in points with 18 on the evening followed by Malik Parsons with 15 and Bubba Furlong with 14. Matej Drgon led in rebounds with eight followed by Ravel Moody with six. Moody, Furlong and Brian Free led the Ranges with four assists on th...