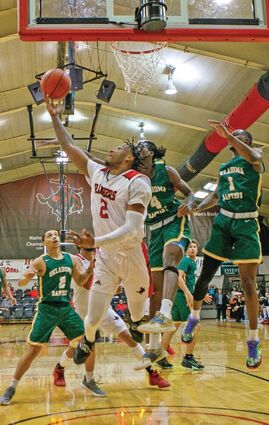 Ranger Larry White (2) goes under the basket to make a shot.

ALVA, Okla. – Northwestern opened conference play Thursday night to Oklahoma Baptist 64-60. The Bison used a solid first half opening a 38-19 lead to help carry them to victory as they would hold on with a four-point win.

The Rangers' four-game win streak was snapped with the loss as they fall to 4-2 on the year and 0-1 in conference play as Oklahoma Baptist improves to 4-3 with a 1-0 conference record.

"I'm really proud of the fight our guys showed in the second half," head basketball coach Vinay Patel said after the game. "We could have easily folded after the first half, but we battled...