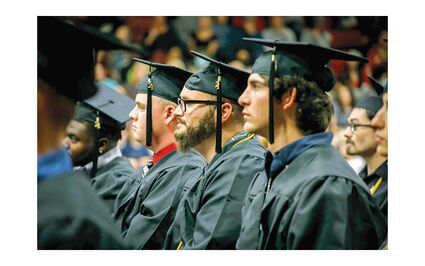 Addressing the 76 bachelor's degree candidates and 17 to receive a master's degree, NWOSU President Dr. Janet Cunningham quoted Nelson Mandela, "Education is the most powerful weapon which you can use to change the world."

"While Mandela's words certainly changed the world for so many in South Africa, you now have the power to change your own world," she said. "Your education will open doors of opportunity that will last a lifetime."

Cunningham introduced guest speaker Chris Rivera, a 1983 graduate of Northwestern who is now the CEO and chairman of Emulate Therapeutics, Inc. in Seattle, Washington.

Rivera was born in Santa Fe, New Mexico, where his ancestors from Spain settled in the late 1600's. He said his father always emphasized the importance of education to his children. His father was the first in the family to attend college, but his education was interrupted when the bombing of Pearl Harbor occurred on Dec. 7, 1941. His father left college to enlist in the Army Air Corps.

After World War II, his parents were busy raising a family. His father never made it back to college, but he always had books on all kinds of topics around the house. He emphasized the value of education, and all five of his children attended college with four obtaining master's degrees.

"The most important investment you can make in yourself is education," Rivera's father told him. "Education provides opportunities."

Rivera next told about two people at NWOSU who influenced him. First there was John Barton, his advisor. Entering college he wasn't sure about a major. Because he loved math and science, Barton suggested he take his audiology class. Rivera described audiology as the study of hearing, balance and related disorders.

He discovered he liked biology and physiology. This led to a master's in audiology from OU Health Sciences Center. The class changed his life forever. "From that point on, I tried to keep an open mind and try new things," said Rivera.

The second influential person at NWOSU was his basketball coach Dan Hays who recruited him to come to Alva. Rivera said Hays was "a great coach, leader, mentor and friend. He is the winningest college basketball coach in Oklahoma state history."

When Rivera began playing on the team, game attendance was light. But in his sophomore year, the Rangers won the Oklahoma Intercollegiate Conference championship. In his junior year, they qualified for the District 9 playoffs. Now the Rangers were playing before a packed house.

Rivera said, "Coach Hays taught me that playing together as a team was more powerful than a bunch of individuals, no matter how talented they were." 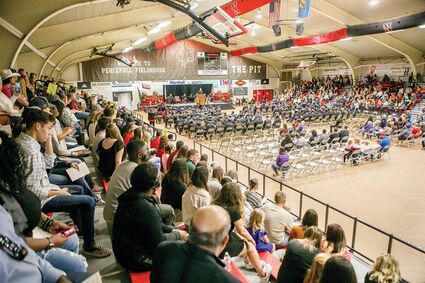 Recruited into the biotech industry in the late 1980's, Rivera eventually worked for Genzyme for eight years. There he was influenced and mentored by CEO Henri Termeer who told him he would be the CEO of a company himself one day. "Henri taught me it was okay to take calculated risks and not be afraid of making mistakes," he said.

Rivera summarized the helpful advice he received from these four influential people. Never stop learning was from his father. Keep an open mind came from John Barton. Work together as a team was from Dan Hays. If you make a mistake learn from it was learned from Henri Termeer.

"One thing I know for sure is that you have received an outstanding education just like I did," Rivera told the graduates. "The diploma you are about to receive is the foundation for your future and the key to your success. It can change your life if you let it."