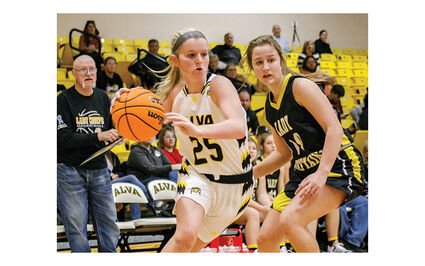 Alva's Morgan Heath (25) dribbles around the South Barber defense to get to the goal for 2 points.

The Alva Ladybugs took on the South Barber Lady Chieftains in the first round of the Alva-NWOSU Shootout Thursday afternoon. The Ladybugs jumped out to an early lead and dominated the game, winning 56-10.

Since the Alva JV was also playing in the tournament, Coach Kris Gore had only eight players suited up for this game. All of them managed to get on the scoreboard.

The Ladybugs opened the game with a 6-0 run on baskets by Brooke Perez and Chloe Durkee plus a couple of free throws from Perez. South Barber's Jazzmin Binning made one of two free throws. Durkee sank a three followed by a Morgan Heath layup, and Alva led 11-1.

Perez followed with a couple of free throw points. Durkee was fouled on a layup and made one of two from the charity stripe. Mary Kate Foster stole the ball and fed it to Carly Argo who scored a basket. Alva now led 16-1.

First quarter scoring was rounded out with a stickback by Perez, an Argo jump shot and one free throw apiece from Heath and Triniti Miller for a 23-1 lead at the end of the first period.

The Ladybugs onslaught on the basket continued with Miller scoring twice and Lakin Gaddy once. Cantrell sank a three for the Lady Chieftains near the end of the quarter. Miller went to the rim in the final seconds to add two more for Alva. The Ladybugs led at the half 37-6. 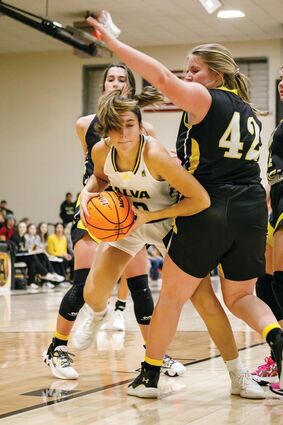 Alva's Hallie Hamilton (10) tries to make it through the South Barber defense.

The Ladybug scoring slowed down in the third quarter. South Barber had two baskets from Cantrell and Jessica Jahay. The Ladybugs found the three-point range with Durkee, Foster and Gaddy all making treys. At the end of the third, Alva led 44-10.

The Ladybugs had two players in double figures: Perez with 14 and Miller with 10. Durkee scored nine points while Gaddy and Heath had seven each. Foster and Argo each had four and Hamilton two.

Cantrell led the South Barber scoring with seven followed by Jahay with two and J. Binning with one.

The Ladybug varsity team will move on to the semi-finals against the Cherokee Lady Chiefs at 7 p.m. Friday in the Alva High School gym.

South Barber will play the Alva JV Ladybugs at 11 a.m. Friday at AHS.