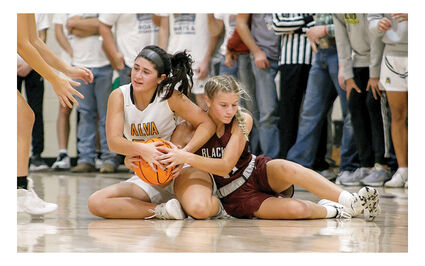 Alva's Chloe Durkee (22) gets the ball back for the Ladybugs after hanging onto the ball for a jump ball.

After a slow start in the first quarter, the Alva Ladybugs took control of the homecoming game with Blackwell Tuesday, winning 66-28. It was the third win for the Ladybugs and the first on their home court for the season.

Blackwell pulled ahead 11-7 in the opening quarter before the Ladybugs took charge with a rub of 11 unanswered points. The first period ended with Alva up 16-11.

The scoring drought for the Lady Maroons continued into the second quarter. The Ladybugs added 14 points to just three for Blackwell. At the half, Alva led 30-14.

The Ladybugs widened their lead in the third quarter, scoring 15 points while Blackwell added nine. At the end of the third, Alva led 45-23.

The Lady Maroons were held to just five points in the final period while the Alva team heated up the scoreboard with 19. The final was Alva 66, Blackwell 28. 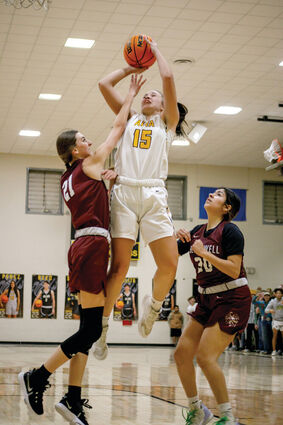 Alva's Brooke Perez (15) takes the shot over the Blackwell defense.

Homecoming Queen Brooke Perez led the Ladybugs in scoring with 23 points followed by Chloe Durkee with 12. Freshman Jaycee Kelln had eight, and freshman Lakin Gaddy, in her first variety game as a starter, scored seven. Carly Argo had five, Hallie Hamilton and Triniti Miller each had four, Mary Kate Foster had two and Morgan Heath one. Alva made nine of 15 shots from the free throw line.

Leading the Blackwell team in scoring was Natasha Hindman with 10 followed by Kinley Botts with five, Bostyn Chambers with four and Keitlynn Rios with three. Chesney Kimbrel, Maysa Edgar and Tatum Jones had two apiece. The Lady Maroons made very few trips to the free throw line, scoring on two of four chances.

The 3-0 Ladybugs head into the Alva-NWOSU Shootout, the first Alva-hosted tournament since 2003, for the remainder of the week.