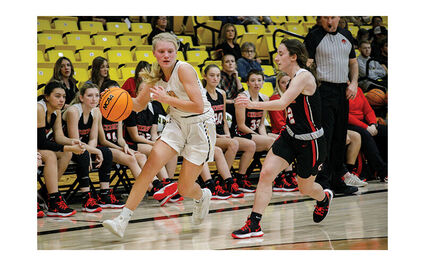 The Alva JV Ladybugs met the Cherokee Lady Chiefs Thursday afternoon in the Alva-NWOSU Shootout. The Lady Chiefs scored first and never lost the lead as they won 52-42.

Cherokee's Gracie Leslie opened scoring with a basket followed Ladybug Jaycee Kellyn making one of two chances from the free throw line. The Lady Chiefs scored on baskets by Leslie and Carson Schanbacher before Grace Gore hit a trey from the right wing to narrow the lead to two.

Cherokee jumped out to a ten point lead 21-11 in the second quarter. Gore scored a basket for Alva, but Gracie Leslie hit one for Cherokee and Maryanna Heim added two points on free throws. Mya Williams brought the margin back to ten with an Alva basket at 25-15.

The remained of the second quarter belonged to Cherokee as Heim scored a basket and two free throws while Leslie also hit a basket. At the half, Cherokee led the Ladybug JV 30-15.

The Alva team outscored Cherokee in the third 13-9. After a Leslie free throw, Alva had two treys from Williams and a basket from Kellyn to narrow the lead to eight.

Cherokee made it to the basket with two from Leslie. Weve made her basket and was fouled, hitting the free throw for a three-point play. That put Cherokee up 36-23.

Perks hit back-to-back baskets for Alva and was fouled on one. She made the free throw to put the margin back to eight. Then Leslie sank a triple from the right wing to put Cherokee up 39-28 at the end of the third.

In the final period, the Alva JV scored 14 points but that wasn't enough to take the lead as Cherokee made 13. Kellyn was hot, making seven points before anyone else scored. 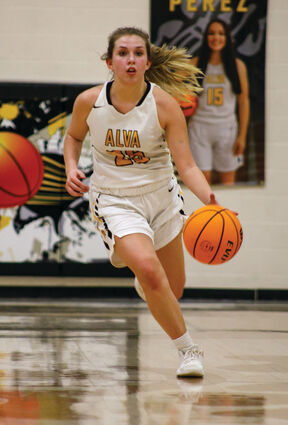 Alva's Mya Williams (25) sprints down the court with the ball during the game against Cherokee Thursday afternoon.

Jackeline Bautista got on the scoreboard with two points for Alva. Kellyn finished out the game with a three-pointer. The final was Cherokee 52, Alva 42.

The Alva JV Ladybugs were led in scoring by Kellyn with 15 followed by Williams with ten. Gore had eight, Perks seven and Bautista two.

Leslie led the Cherokee Lady Chiefs with 21 points followed by Schanbacher with 14. Weve had seven with Heim and Hensley rounding out the scoring.

The Alva JV team will move into the consolation bracket to play South Barber at 11 a.m. on Friday at Alva High School.

The Cherokee Lady Chiefs advance to the tournament semi-finals to play the Alva varsity Ladybugs at 7 p.m. Friday.

Finals of the tournament will be played Saturday in Perceful Fieldhouse at NWOSU.