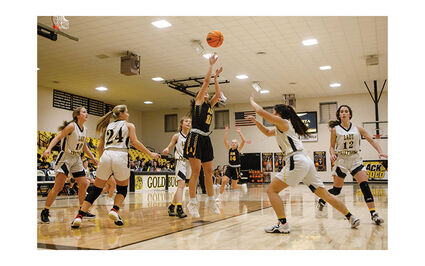 Alva's Jackeline Bautista (10) takes the shot while surrounded by the South Barber defense.

The Alva JV Ladybugs, coached by Jennifer Taylor, took an early lead in Friday morning's game against South Barber. Although the Lady Chieftains outscored the Ladybugs in the second quarter, they couldn't catch up. The JV Ladybugs won 53-27 in the second round game of the Alva-Northwestern Shootout.

Jaycee Kelln had back-to-back baskets to open the contest. After a Randee Perks score for Alva, Kelln stole the ball and added two more points. Mya Williams put one through the hoop, and Alva led 10-0.

During the Alva run, Grace Cantrell had a chance at the free throw stripe but missed both shots. She was finally able to get a basket to put South Barber on the scoreboard. Then Perks was fouled while shooting and made both her free throws. Kelln also went to the charity stripe and made both shots. Alva now led 14-2.

Cantrell took another turn at the foul line and made both free throws. Kelln added a basket. Then on the inbound pass, Kelln stole the ball and went to the rim for another two points. At the end of the first quarter, the young Ladybugs led 18-4.

Alaina Pierce scored the first basket of the second period. She was fouled but missed the charity shot. Perks and Kelln made baskets to enlarge Alva's lead to 24-4.

Cantrell missed a basket but was fouled. She missed both free throw attempts. After that, the rest of the quarter belonged to the Lady Chieftains. Cantrell was finally able to score for South Barber. Jazzmin Bining also made a basket. Cantrell was fouled and made one of two tries. Arrington Allen and Jaden Allen each made a basket to finish the quarter. Alva led 24-13 at halftime.

As the third quarter opened, Cantrell made the first successful three-point shot of the game. South Barber was now within eight points of the lead. Grace Gore went for an Alva basket but was fouled. She made one of two shots. Cantrell followed with another basket to pull within seven of Alva.

Gore widened the gap with a three-point shot. J. Bining scored a basket, and Kelln answered with one for Alva. It was now 30-20 in favor of the Ladybugs.

Kelln hit another basket. Autumn Drake went for a layup that didn't go in, but she was fouled and missed both shots. Kelln scored another basket. Williams sank a trey for Alva. As the quarter closed, Kelln missed a shot but got her own rebound and scored. At the end of the third, the Ladybugs led 39-20.

In the final period, the Ladybugs scored 14 points to seven for the Lady Chieftains. Perks opened with an Alva basket followed by back-to-back threes from Williams. Perks was fouled and made one of two shots. Kelln also went to the charity stripe, making one of two free throws. Alva now led 49-20.

South Barber finally got on the scoreboard with a basket by Cantrell followed by one from J. Binning. Kelln put in a jumper, and Perks scored on a stick-back. Alva led 53-24.

As the game clock ran down, A. Allen made a basket for South Barber, and Cantrell added a free throw. The final was Alva 53, South Barber 27. 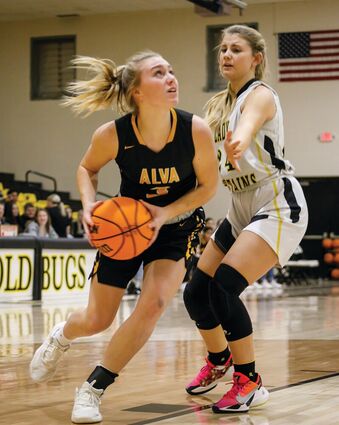 Alva's Jaycee Kelln (3) pushes her way through the South Barber defense to get to the basket.

The JV Ladybugs had three players in double figures. Kelln led with 25 followed by Williams and Perks with 11 each. Gore had four and Pierce two.

South Barber scoring was led by Cantrell with 15. J. Binning had six, A. Allen four and J. Allen two.

The Alva JV Ladybugs will move into the consolation championship final to be played Saturday. Tip-off is at 1 p.m. in Perceful Fieldhouse on the Northwestern campus.

South Barber girls will be playing for seventh place Saturday with a 10 a.m. game, also at NWOSU.