• Driver injured when truck blown over 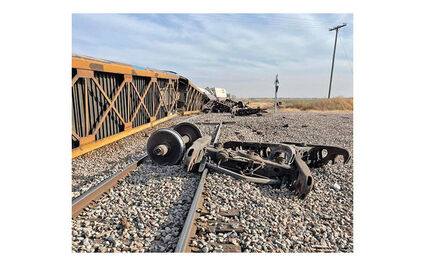 Strong wind gusts caused a train derailment at Carmen in Alfalfa County Wednesday. The overturned cars were reported to be empty, and there were no injuries. This photo was posted by Carmen Fire and Rescue.

Near Carmen a train derailed due to the high winds. All of the 15 to 20 railcars that came off the rails and overturned were empty.

According to the Oklahoma Mesonet, the peak wind gust of 79 mph was recorded at Goodwell in the panhandle. Alva's peak gust was 60 mph, and Freedom's highest gust was recorded at 66 mph. The May Ranch site, located in far northern Woods County recorded a top wind speed of 71 mph. Much higher winds were reported in Kansas.

Cherokee and Fairview also had 60 mph wind peaks. Woodward recorded a 61 mph gust, Buffalo had a peak of 77 mph and at Beaver winds reached 78 mph.

According to the Oklahoma Highway Patrol, the 2015 Volvo truck was driven by Joshua Adam Owens, 41, of Oklahoma City. He was transported by Major County EMS to Integris Bass Baptist Health Center in Enid where he was admitted for external head, trunk and leg injuries and listed in stable condition.

Owens was driving eastbound on US-412 when he encountered severe crosswinds on the highway, causing the vehicle to overturn and depart the roadway on the north. The truck came to rest on the driver's side. Owens was pinned for approximately one hour and thirty minutes before being freed by the Fairview Fire Department.