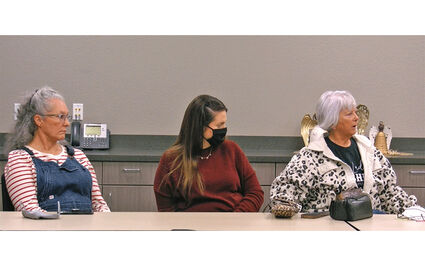 Woods County residents, from left, Sally Bush, Allyson Bush and Katie Blunk talk to the WCEDC about the need for reliable internet service to the rural area.

Three Woods County residents attended the Tuesday meeting of the Woods County Economic Development Committee (WCEDC) to seek answers to their poor internet service. Katie Blunk, Allyson Bush and Sally Bush are neighbors in a rural part of the county.

Blunk described herself as a landowner and resident in the area that is being underserved. She said Pioneer Telephone has been installing fiber cable in her area, but it does not reach her ranch. "Since Pioneer has been out there working, we have been asking a lot of questions and getting a lot of different answers," she said. That morning she received notification from Pioneer "that said we were in an area that was not federally funded."

Committee member Dr. Kay Decker said a lot of the county is not served by fiber. "We have a lot of people working from home and students at every level that need something besides satellite video."

Allyson Bush said she and her husband have Pioneer cellphones and Pioneer internet for their businesses. However, service at their rural home is terrible. They have to use a booster to try to make phone calls. She said they have tried other services including Elon Musk's Starlink satellite service. She said Starlink only works if the wind is not blowing.

Committee member Randy McMurphy who lives between Alva and Freedom said KanOkla installed fiber but stopped within a few miles of the state line. "It's ridiculous that they're only doing part of a job," he said of Pioneer, KanOkla and other providers.

WCEDC Executive Director Neal Williams presented the financial report, saying the committee is in good shape. They have received $39,590 in pledges and expect more to come in soon. The NWOEDA (Northwest Oklahoma Economic Development Authority) has not met yet to approve distribution of funds to the WCEDC.

Reporting on the development of the new website, Williams said he, Eaton and the Northwest Technology IT director attended a meeting to get some training. He is hoping to find a college intern to help work on the website.