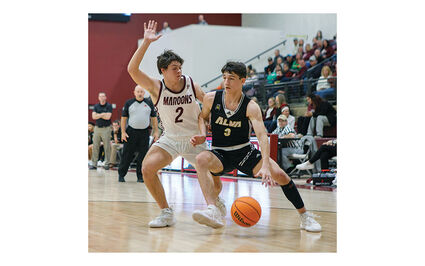 Alva's Austin Reed (3) dribbles on the base line trying to reach the basket.

In a road game Friday night, the Alva Goldbugs beat the Perry Maroons in a conference match. The Maroons were 5-1 going into the game while Alva was 7-0.

The Goldbugs had difficulty getting shots to fall, but their strong defense and precise free throw shooting made up the difference. In the low-scoring first quarter, the Goldbugs led 6-3. At the half it was Alva 16 and Perry 10. The Goldbugs held Perry to just three points in the third while adding nine themselves to lead 24-13. The final score was Alva 41, Perry 27.

Alva's Jackson Feely opened scoring when he grabbed an offensive rebound and put the ball in. Kyler Penco added another Alva basket. Bryson Cash hit a basket for Perry's first score. Hayden Garfield went to the free throw line and made one of two to cut the Alva lead to one at 4-3.

Austin Reed scored on an assist from Penco. Dylan Hight went to the charity stripe for Perry but missed both tries. Penco and Reed tried for baskets that didn't go in. The quarter ended with Alva on top 6-3.

Garfield scored a Perry basket to start the second quarter scoring. Penco made two trips to the free throw stripe and made all four baskets. Hight scored from three-point range, and Cash added a basket to tie the score at 10.

Feely's layup put Alva ahead by two, then Daylon Malone stole the ball and went for the layup to increase the Goldbug lead to 14-10. Penco widened the gap with a basket. Hight made a couple of attempts at three-pointers but failed. The Goldbugs led 16-10 at the half.

Malone bounced one off the rim and through the hoop to open the third quarter scoring. Feely added an Alva layup, and the Goldbugs led 20-10.

Cash made a trey for Perry, but baskets by Penco and Feely kept the Alva lead. The Goldbugs were up 24-13 at the end of the third period.

Kade Webb hit a basket for Perry to open the final period. Feely made another Alva basket. Garfield added two points for the Maroons. Feely scored again, and Alva led 28-17.

Hight missed both of his chances at free throws for Perry. After plenty of rebounds, Goldbug Braden Hofen made his first basket of the night on a Penco assist. Hall scored for Perry and earned a foul. He missed the free shot. Penco was fouled and went to the line for a one-and-one. He made both free throws, and Alva led 32-19.

Hall added another basket for Perry. Hofen scored an Alva basket and was fouled. He missed the free throw. On the next play Hofen fouled out, sending Garfield to the free throw line where he made both shots. Malone was fouled on his basket attempt and made both free throws. Alva now led 36-23.

Cash scored for Perry. Malone was sent to the charity stripe again where he made one of two. Garfield scored a Perry basket. Malone answered with a basket for Alva. Penco went to the free throw line in the final seconds, making both shots. Alva won the game 41-27.

The 8-0 Goldbugs will enjoy a break before they return to practice. Feely and Penco led Alva in scoring with 12 each followed by Malone with 11. Hofen had four and Reed two.

The Alva Goldbugs play next in a road game at Blackwell on Tuesday, Jan. 4. The Wheat Capital Tournament at Chisholm follows on Jan. 6. Alva will meet Woodward at 11:30 a.m. in the first round.