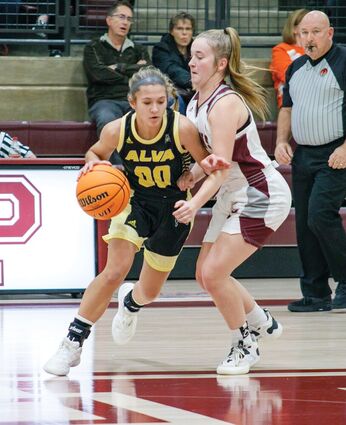 The Alva Ladybugs traveled to Perry Friday night to take on a tough Lady Maroons team. The Perry girls led by ten points after the first quarter, but the Ladybugs fought back to trail by only four at halftime. In the third quarter, the Lady Maroons held the Ladybugs to only two points while they scored ten for a 12 point lead. Perry continued to build their lead in the final period, and the final score was Perry 38, Alva 24.

Perry double-teamed Alva's Brooke Perez during most of the game, limiting the Ladybugs' leading scorer to just four points. The Alva team had 25 turnovers during the game, many of them coming from ball-handling errors.

Perry controlled the tipoff to begin the game, and Kennedy Hight scored first for the Lady Maroons. Mary Kate Foster tied the game at two points. Perry scored four times on a pair of threes by Josie West and Atlanta Ward and baskets from Hight and Ward to lead 14-2.

Ladybug Chloe Durkee went for a layup and was fouled. She made both free throws. West tried unsuccessfully for another three-pointer before the buzzer sounded. Perry led 14-4 at the end of the first quarter.

Second quarter scoring was opened by Perry on a stick-back from Gracie Brownlee. Foster was fouled as she went for the hoop and made one of two free throws. Hallie Hamilton sank a three-pointer to narrow the margin, and Perry led 16-8.

Perez got on the scoreboard with a couple of free throws. Alva freshman Lakin Gaddy made a basket to cut the Perry lead to four at 16-12. Maebry Shields scored from three-point range to widen the gap. Morgan Heath picked off a Perry pass, giving Hamilton the opportunity for another trey. Perry was back to a four point lead at 19-15.

West scored a three-pointer from the corner, but her next attempt at a trey was in and out. Durkee had the final points of the half as she made a three-point shot with one second to go. Perry led 22-18 at the half.

The third period opened with baskets from Hight and Braylee Dale for Perry. West added another trey, and Perry was up 29-18. Jaycee Kelln made a jump shot for Alva.

Both teams struggled to get shots to fall in several trips to the basket. Ward finally got the ball in from three-point range for a 32-20 Perry lead at the end of three quarters.

Durkee tried for a basket as the final period opened, but it didn't go in. Kelln went for a shot and was fouled. She made both free throws for Alva. Hight's basket didn't go in, but teammate Amber Dohmen grabbed the rebound and put the ball through the hoop. Perry led 34-22.

First West, then Durkee, then West made unsuccessful three-point attempts. Dale put one in off the glass to increase Perry's lead to 36-22. Dale added a couple of free throws, and Perez finally got to the basket for two-points. Perry dribbled the ball to run out the clock. The game ended with Perry at 38 and Alva 24.

The Ladybugs are now 6-2 on the season as they go into the Christmas break. Hamilton led the Alva scoring with six followed by Durkee with five. Kelln and Perez each had four, Foster three and Gaddy two.

West led the Lady Maroons with 11 followed by Ward with eight. Dale and Hight had six each. Shields had three points while Brownlee and Dohmen each had two.

After the break, the Ladybugs will travel to Blackwell for a 6:30 p.m. game on Tuesday, Jan. 4. The Wheat Capital Tournament begins Jan. 6 with the Ladybugs playing Woodward at 10 a.m. in the first round.