Much discussion but no consensus on ambulance rate increase 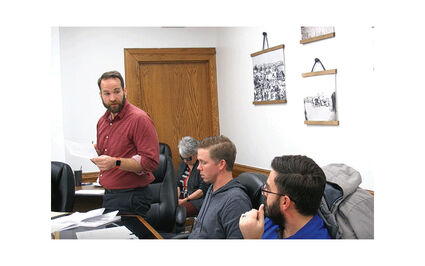 A lengthy discussion on proposed ambulance rate increases was held during the Monday Alva City Council meeting. It has been nine years since Alva ambulance rates were adjusted. Numerous opinions were expressed and ultimately the proposal was tabled for more study.

Councilmember Taylor Dowling went over the rates while reporting on the Public Safety Committee meeting. One change is to add $100 extra to bills for anyone who is not a resident of Woods County. This was an acknowledgement of the tax contribution of Woods County property owners to the EMS services in the county through passage of the 522 EMS District. The mileage rates are proposed to increase from $12 per mile to $18 per mile.

Here's the schedule of rates being proposed:

Mayor Kelly Parker said, "We talked at pretty good length about our equipment as well." He said the average age of the ambulances was 15 years, but he was later corrected. The oldest ambulance is a 2003 model and the newest of the four is a 2018 model.

"I am a board member of the 522 for the Woods County 522 board and I've talked with several of the commissioners and the council members," said Joe Phillips in remarks to the council.

"We've already taken out 20 percent of the projected amount. That projected amounts is already about $375,000 so more than likely, you're going to get really close to $325,000.

"So we're giving you another $325,000. I'm not saying that the ambulance service is going to be on its own and making money for the city of Alva or even breaking even. But we never have in the past. I would just say, vote no."

When the resolution adjusting the ambulance rates came up on the agenda, a long discussion ensued. Regarding the aging ambulances, Mayor Parker said, "That's the rut we get in when we don't have the funds available to do things. The rates are something that by and large an insurance company is going to pay these, and our residents aren't going to feel that. By and large the people that are paying the tax are going to feel it a lot less than the people that aren't paying the tax, and it would set us up to have a capital replacement program and allow the 522 funds to be toward the operation.

City Business Manager Angelica Brady said the discussion was prompted by the city's new ambulance billing company. They recommended rates be reviewed annually. "When we looked at it, we didn't go with the highest rate change. We looked at what our local surrounding agencies were charging as well, as our service included. We're trying to stay consistent with what our local surrounding agencies are," she said.

"I do feel like our mileage rate should be reflective of our current fuel situation," Brady added. "That does need to be looked at more frequently than every nine years."

"Based on the information they gave us, that's what we're anticipating," answered Brady.

Parker said, "And some of what has been brought in this year is actually past bills being paid. It's for services completed in previous years."

Sadie Bier asked, "How long have we been with the new billing system?" Brady said since March or April of this year.

"So we've got a projected $600,000 that's coming in that the city's not going to have to fork out," said Brooks. "That's quite a bit. I've had a lot of people that are quite upset talk to me because if they knew the city was going to increase rates, they would have never voted for that tax."

Saying he was playing devil's advocate, Daniel Winters reminded the council of the city's earlier exploration of contacting with a private company to operate Alva's ambulance service. "Their (Pafford) rates that they were quoting to us was not only going to cost the city out of the general fund around $330,000 to $350,000, I don't remember the numbers exactly, they were also going to double the rates over what we were currently charging, so a run was going to be close to $2,000 as opposed to around $1,000 now. When we talk about not voting for that (522 district) if we were going to raise the rates, the rates would have been substantially different if we had gone with Pafford," he said.

"To be honest, I'm playing devil's advocate with this because I'm struggling with this, simply a lot of it dealing with the timing. We did just pass the 522 and we haven't gotten to fully see the fruits of that yet which could come in below estimate, above estimate and so forth," Winters added.

Parker said, "I just go back to, and we've done this since before I was mayor, where we kick the can down the road. We won't try to make our revenue situation better, but we want better of everything that our citizens want. Our citizens ... they want some assurances that that ambulance is going to make it to Enid or Oklahoma City. We don't put them on the road unless they're road-worthy, I'm not saying that. I want a person's life to be taken care of, not the best that we have now, but to always be at a high standard."

"There are two considerations here I think you're leading into is when you say we're $200,000 short we have absolutely no capital outlay scheduled or budgeted for EMS this year and didn't last year either," said Winters. "And the second thing is we are looking at a 7 percent annual inflation, and based on what we have typically done with our wages there's no way we can meet a 7 percent CPI (consumer price index) in the coming year, but that's what we're looking at, a yearly 7 percent CPI which is how we base our wage increases."

Randy Stelling said, "I think it comes to irresponsibility. We have costs that keep going up. I know everybody does. For many years there hasn't been anything (rate changes). That's kind of how we got into this situation we are in. Everything's kind of upside down."

Stelling also talked about Alva's inability to hire enough trained people for EMS. "I've always called it the Alva factor," he said. "There's a lot of people who are qualified, they can go to other places and make a lot more. So we've almost got to pay them more to come here."

After more discussion Winters commented, "There are several communities that provide, like a subscription service, much like Air Evac is. Some of them are mandatory, some are voluntary. Was that considered as a possibility?

"That's actually something we said in the meeting, that we would propose this rate structure and then start working on a plan for a subscription because I think that would make it even more palatable for the people in our service area, our county, if they can have that option," said Parker.

"An increase is inevitable, but can we make that increase more palatable and still accomplish the same goal," said Winters.

Brooks suggested and then officially made it a motion to table the ambulance rate adjustments, and Dowling seconded it. The council voted unanimously in favor of the motion.

Mayor Parker conferred with City Attorney Rick Cunningham about violating open meeting laws if he assigned both the Public Safety Committee and the Finance Committee to study the rate proposal. A majority of the eight member council cannot meet to discuss city business outside of the official city council meeting. Cunningham said the two committee chairmen could talk about what each separate committee discussed, and the chairs could then report back to their committees. With that, the mayor assigned the matter to both committees.