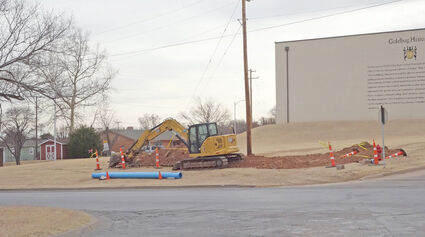 Work began last week to install two fire hydrants at Alva High School. One will be here by the entrance to the north parking lot.

On Wednesday, Dec. 1, the Alva City Council held an emergency meeting on a waterline leak that cut off the supply to Rural Water District 1 at Capron. The meeting was to authorize the city business manager to spend more than her $25,000 limit for the repairs.

City workers were having difficulty digging down to the waterline which was buried deeper than usual. An alternate fix involved running a poly line through the original 90-plus year old line to get water flowing again. This was estimated to cost upward of $30,000.

At Monday night's city council meeting, Business Manager Angelica Brady said the project ended up costing the city $17,100. "By the time Covalt's crews were able to arrive on scene the next morning (Dec. 2), the county had come in, and they were able to dig down further and were able to find the pipe where the line was broken," said Brady.

"And so Covalt Construction was able to come in with their experienced crew, isolate the waterline leak, cut it out and replace the waterline. Obviously that was a much more cost-effective method than what we would have had to do. That worked very well. They were able to get that project done on Thursday. And then our water department had another waterline break that next day."

A project that was supposed to begin before school started in August is now underway. The contractor putting in two fire hydrants at Alva High School began work on Monday, Dec. 20. One hydrant will be at the edge of the driveway at the north parking lot. The other is located by the new practice facility.

Brady said they will be boring under about one block to connect the waterline by the parking lot. The one by the practice facility will connect to the Apache Drive line.

During construction at the high school on the art building, a fire hydrant had to be removed. These two will replace that hydrant.

"I know we did this on Facebook but I did want to thank Lance Harzman for his years of volunteering to put our Christmas lights up," said Brady. "We did take a new approach to our Christmas lights downtown, and our street department did a great job hanging the wreaths and lighting the poles."

Brady said the city and chamber plan to add some new things to the downtown Christmas lighting in the future.

"I felt like there was a lot of information but it was good information for us just kind of helping us understand the uses and how our reporting needs to be done," Brady said.

The citizen petition audit that has been ongoing for some time is nearing completion. Brady said she talked to Jay Holland from the State Auditor and Inspector's Office recently. "He called me the beginning of last week and just wanted to let us know when they came on site and gathered all the information, he and his boss put the report together and then it has basically been sitting in queue for review. He told me we are next in line for the review process so we should maybe anticipate some additional questions but that should be out shortly," she said. "That may be relative because they have been working on that for about a year now. Hopefully we'll have that report back soon."

At the airport meeting on Dec. 13, Brady and the airport manager were given the go ahead to get part of the runway lights working. The lights have been out for about two months. A major concern is the need for medical transport aircraft to land at night.

Brady said she talked to AirEvac, and they told her the 3,900 feet of lighted runway would be sufficient.

"Williams Electric is expected to be in Alva the first part of this week to get that portion of the runway lights working.," Brady said Then Williams will replace 1,000 foot segments of lights along the other part of the runway to try to determine the location of a short in the electrical circuit.

Brady said the insurance company has been contacted and they will send someone out to investigate. It's believed the problem originated from a power surge.

The personnel committee met recently and discussed the city grant writer position. She said they finalized the job description and the position will be posted on the city's website.

Connor Martin reported from the finance committee that the total of all cash accounts for the city was $2.7 million.

The committee also discussed the business license ordinance and made some wording changes. The changes have now been sent to the city attorney for review.