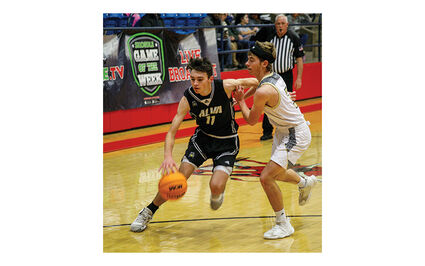 Alva's Jackson Feely (11) tries to dribble to the basket.

The Alva Goldbugs are the No. 2 seed in the Wheat Capital Tournament, and they showed why when they faced Woodward in the first round Thursday. It's been several years since the Goldbugs came out on top against the Boomers, but they had a sweet victory winning 49-34.

Woodward pressed hard, and the first quarter score was close with Alva leading 12-8. Both teams scored 11 points in the second with Alva maintaining a four point 23-19 lead at the half. The Goldbugs outscored the Boomers 15-10 in the third and held Woodward to just five points in the fourth to win 49-34.

Austin Reed put Alva on the scoreboard first with a basket. Jesus Cano followed with a Woodward layup. Kyler Penco scored on a layup to put Alva up 4-2. Sam Cheap went to the free throw line, making both shots to tie the score.

Braden Hofen scored an Alva basket and then scored again. Penco added another two points, and Alva led 10-4. Cano scored for Woodward, followed by another Hofen basket. Cheap made the last points in the quarter, and Alva led 12-8.

In the second quarter, Peyton Hughes went to the free throw stripe and made both shots. Hughes followed that by sinking a trey and putting Woodward in the lead 13-12. Jackson Feely turned the score around with a basket to give the lead back to the Goldbugs. Hofen was fouled as he attempted a basket and made one of two chances. Penco also went to the charity stripe and added a point.

Then Woodward's Caden Reid made two free throws. The Alva lead was back to one at 16-15. Reed scored a basket for Alva on a Chuck Shelite assist. Then Woodward's Reid scored. Shelite made a basket for the Goldbugs, and Alva led 20-17. Zach Chavez, usually a Boomer leading scorer, made his first points, sinking two from the charity stripe. Before the quarter ended, Feely sank a three-pointer for an Alva four-point lead at the half 23-19.

Scoring started off slowly in the third quarter. Cano finally hit a basket followed by two points from Daylon Malone. Chavez sank a three to pull within one of the Alva lead. Feely answered with a trey. Cano went to the free throw line and made one of two shots. Then Feely put in another shot from three-point land, and Alva led 31-25.

Chavez scored for Woodward then Weston Tucker hit an Alva basket. Reid went to the charity stripe and made two points for the Boomers. Shooting from the right corner, Penco made a three-pointer. Jaxon Jones got on the scoreboard with a jumper, and Alva led 38-29 at the end of three quarters. 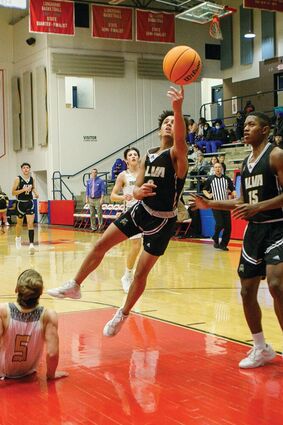 Alva's Daylon Malone (2) stretches to get the ball to the goal.

Penco opened fourth quarter scoring with a Goldbug layup. Cheap scored on a couple of free throws. Penco sank a trey, and Alva led 43-31. Both teams struggled getting shots to fall. Finally Hofen hit one of two free throws for Alva. Hughes made a shot from three-point range to narrow the Alva lead to ten. Feely made three trips to the free throw stripe, scoring on four of six shots. Reed had the final trip to the charity stripe to add one for Alva. Time ran out, and Alva won 49-34.

Feely led the Goldbugs in scoring with 15 points followed by Penco with 13, Hofen with eight and Reed with five. Finishing out the Alva scoring were Shelite, Malone, Jones and Tucker with two each.

The Boomers were led in scoring by Hughes with eight followed by Cano and Chavez with seven each. Cheap and Reid had six apiece.

The Goldbugs are now 10-0 on the season as they advance in the Wheat Capital Tournament at Chisholm. Alva will take on the winner of the Garber vs Perry game at 8:30 p.m. tonight (Friday).