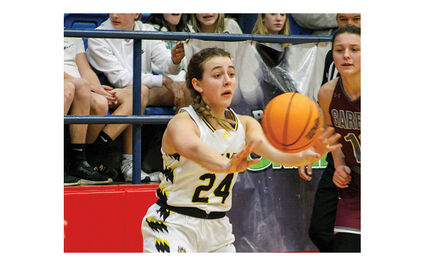 Ladybug Mary Kate Foster (24) passes the ball to her teammate during the game against Garber Saturday afternoon.

The Alva Ladybugs fell to Class A Garber in the consolation finals at the Wheat Capital Tournament Saturday afternoon. Garber's Lady Wolverines were bigger and stronger than the Ladybugs and effectively guarded under the basket, sending the Ladybugs to the perimeter. Brooke Perez was held to two points as she was double-teamed whenever she had the ball.

In the first quarter, Garber took a five-point lead at the start, but the Ladybugs tied the game at 12 at the end of the period. Alva was able to pull ahead in the second, scoring 10 points while holding Garber to three. At the half, Alva led 22-17.

In the third, Garber edged ahead before the Ladybugs eased in front to lead 29-27. In the final quarter, Leila Washington took charge, scoring seven of Garber's 14 points while Alva was held to eight. The final was Garber 41, Alva 37.

The first point of the game came from Garber's Ashlan Light who made one of two free throws. That was followed by baskets from Washington and Alyssa Johnson to give the Lady Wolverine's a 5-0 lead. Chloe Durkee sank the ball from three-range for Alva. Then Grace Howry scored on her own rebound and stick-back. Jaycee Kelln had back-to-back baskets to tie the game at seven.

Johnson scored a trey, but Kelln sank a three-pointer to tie. Howry hit a basket, but Kelln answered with one for Alva and the 12-12 tie ending the first quarter.

Kayleigh Eiland scored for Garber to open the second period, her only points in the game. Johnson went to the free throw line and made one of two to give Garber a three point lead. Lakin Gaddy hit back-to-back threes to tie and then put Alva on top. Kelln sank a basket, and Alva led 20-15.

Light scored on a put-back, and Perez made her only basket of the game to give Alva a 22-17 lead going into halftime.

The third period opened with two made free throws by Washington. Johnson scored on a basket, and the Alva lead was cut to one. Chloe Durkee dropped in a three-pointer from the left corner to widen the Alva lead to 25-21.

Light went to the free throw line and made both shots. Kamilah Gay made a Garber basket, and the score was tied at 25. Kelln gave Alva a brief lead when she scored a basket, but Washington tied the game at 27 with her basket. As the clock edged to zero, Gaddy hit a basket to give Alva a 29-27 lead at the end of three.

Washington scored on her own stick-back to open the fourth quarter and tie the game at 29. Gaddy made a basket to put Alva ahead, but Washington answered with two points. Then Johnson made a shot from three-point range to give Garber a 34-31 lead.

The taller Lady Wolverines were doing an effective job of guarding under the basket so the Ladybugs had to fight for each shot. Light and Gay each added a basket to increase the Garber lead to 38-31. Durkee hit a three-pointer for Alva. Kellen went to the free throw line, making one of two shots. Garber led by five at 40-35.

Garber took control of a loose ball and began to delay. Finally a Ladybug fouled Washington who made one of two from the charity stripe. Gaddy was able to work her way in but missed the shot. Before the game ended Gaddy made a basket, but it wasn't enough. Garber won 41-37.

With the loss, the Ladybugs dropped to 8-4 on the season. Leading the Alva scoring were the two freshmen: Kelln with 14 and Gaddy with 12. Durkee had three treys for nine points, and Perez had two.

Washington led Garber with 13 points followed by Johnson with 11. Light had five while Howry and Gay had four each. Eiland scored two points. 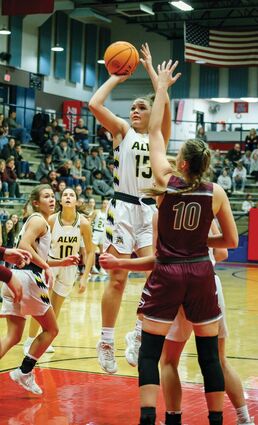 Ladybug Brooke Perez (15) takes shot in the center of the lane over the Garber defense.

The Ladybugs will have some time off before their next game. They travel to play at Oklahoma Bible Academy at 6:30 p.m. on Thursday, Jan. 13. That will be followed by a home game against Chisholm on Friday.