Codays deliver about $15,000 in tornado relief to Kentucky 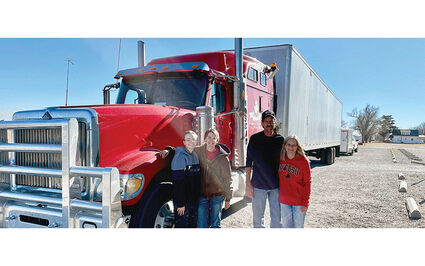 From left: Erica Coday, Taylor Phillips, RL Coday and Tricia Coday pause in Meno to pick up even more pallets of donations, and pause by the semi for a photo op before heading off the Bowling Green, Kentucky, in hopes of easing the pain of those affected by the vicious tornado outbreak in mid-December.

The Dec. 10 tornado outbreak affected thousands in Arkansas, Kentucky, Tennessee, Missouri and Illinois. When Tricia and R.L. Coday, and their kids Erica and Taylor, saw the news, they had to do something to help.

It was an unusually devastating tornado outbreak.

"Although damages are still being calculated, current reports are that 68 tornadoes, ranging in intensity from EF1s to EF4s, ravaged a path some 250 miles long," Tricia Coday said in one of several emails she wrote First Christian Church, of which she is a member. "Estimates now are that 1000 people have been left homeless and, sadly, 91 lost their lives. Many people woke the morning of Dec. 11 to find completely decimated homes, businesses, crops, animals, jobs, and even whole neighborhoods gone. Several towns in Kentucky were swept completely away."

As the Codays watched the media coverage, "the personal accounts of survivors were nearly incomprehensible," Tricia said. "Every time a tornado hits it's bad, but the fact that multiple tornadoes hit, and it being so close to Christmas, made it even worse."

RL, thinking aloud, said those survivors would need semi-trailer loads of supplies brought in. "If I knew the people who needed those supplies were actually going to physically get them, I would drive it out there to them at no cost," he vowed.

Figuring Out the Logistics

He asked Tricia to do some research "to see if I could find somewhere that had supplies on hand to donate but lacked the funds or a means to transport it all," Tricia said. "At first, it was a little hard to find any information, but once I started talking to some friends and family, it didn't take long to find someone that knew someone directly affected by the tornadoes," she said.

"My niece Taylor Phillips, who lives in Alva, recently had a guest speaker on her podcast, "Triple Threat with Tay," by the name of Sarah Bridgeman, who by the way lives in Bowling Green, Kentucky. Taylor stays in touch with her still, and so she immediately contacted her."

Bridgeman made some calls to find where a semi could be unloaded and how the supplies could be ensured to wind up in the hands of those who need them.

The Alva Chamber of Commerce let the Codays put the trailer behind their building for two days while they gathered supplies.

"My daughter, Erica Coday, is in Alva Rainbow Girls, and as part of becoming Worthy Advisor in early February this year, she obtained permission to fulfill part of her service project a little ahead of time by scheduling girls to volunteer hours to help load the trailer and sort the supplies coming in," said Tricia. "Several groups of girls volunteered during the drop off times and they were a huge help! Also, since Taylor is a member of Faith Center Fellowship church in Meno, Pastor Cody Anderson and her group worked together to bring in donations from their area members in Ringwood, Enid, Lahoma and Meno.

After loading supplies in Alva and Burlington on Dec. 29, the Codays stopped in Meno to load their pallets as well, and then they were officially on the way to bring hope and help to potentially thousands of people in dire need in other states. They were carrying an estimated $14,000-$15,000 of donated supplies, Tricia said.

Northwest Oklahoma (via the Codays) to the Rescue

"We had so many donations come in, it was amazing," said Coday. "What a great turnout of love and support for helping the victims of the tornadoes. Donations came from all over northwest Oklahoma."

They made Springfield, Missouri, that night and got a hotel room. Early the next morning, they were back on the road and around 4 that afternoon they arrived at Greenwood Mall (known locally as The Old Sears Store) in Bowling Green.

The Old Sears store had been vacant for years, but a slew of volunteers turned it into a highly organized distribution warehouse for donated goods and supplies. "Everything you could think of was stacked in bins and aisles, all labeled," said Coday. "Some of the things I saw were 10-20 medium and full-sized brand new generators and probably just as many new chainsaws. There were propane tanks, bottles of heating oil for heaters, new children's swing sets, toys, lawn furniture, and even furniture like sofas and mattresses," she said.

One of their contacts, Sam, a pastor in training with Hillvue Heights Church in Bowling Green, gave the couple a tour and explained the process of moving the goods in and out to those who need them. The warehouse goods are used to restock the "store," which is in a huge room adjacent to the warehouse – essentially the old Sears main shopping floor.

People needing items have designated shopping times once a week to pick up anything they might need, free of charge. Sam's church helped spearhead this outreach in less than two weeks and they've plans to grow the warehouse into a disaster relief facility where supplies will be trucked out to any future disaster events all over the nation.

"Any apprehension we may have had about arriving, unloading and the eventual use of your supplies was quickly eliminated. There's a constant revolving of items in, items sorted and items re-stocked to the store where people can easily access them, or volunteers can deliver them to smaller communities around BG that can't get into the city," Tricia said.

Codays Give Heartfelt Thanks to God and to Those Who Helped

"It was a whirlwind of miles for sure, but it was a lot of fun and a big learning lesson," Tricia said. RL, myself, Erica, and Taylor have been blessed and honored to transport all of the supplies you donated. Thank you all so much for allowing us to realize this mission that God called us to do. Thank you to everyone and our wonderful church family (AFCC) for all of the prayers, well wishes, and donations.

"I took 10 prayer blankets and church information flyers with us and I gave them to Sam to give to the victims, or even some of the volunteers in his church or warehouse. He was touched by the gift and grateful and thankful for the prayers over them.

"It was heartbreaking to know that so many have suffered and still are," Tricia said, "but it was heart-warming to see how God had turned this devastating weather tragedy into something so positive."