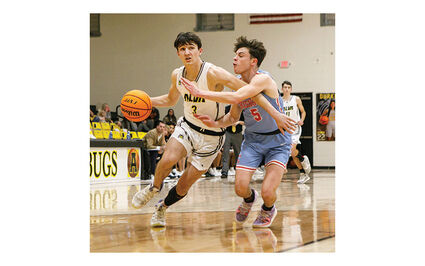 Alva's Austin Reed (3) determinedly pushes his way through the Chisholm defense to make it to the basket.

The Chisholm Longhorns picked up some new moves after watching Alva play Kingfisher in the Wheat Capital Tournament last week. They gave the Goldbugs a little more trouble than expected Friday night, especially in the third quarter. The Goldbugs upped their efforts in the final period and prevailed 67-48.

In the first quarter, Alva out-scored Chisholm 12-5. The Goldbugs made 20 points in the second while the Longhorns had only half that many. Alva led 32-15 at the halftime break. In the third period, Chisholm gained ground with 21 points compared to 14 for Alva, but the Goldbugs kept a ten-point lead at 46-36. In the final period, one Longhorn player accounted for nine of Chisholm's 12 points. The Goldbugs made 21 points in the final and won 67-48.

The game opened with Braden Hofen blocking a Chisholm shot and Jackson Feely getting the rebound. Austin Reed put the first points on the board with an Alva basket. Webb Bullard scored to tie the game, but Reed made another basket and was fouled. He missed on the free throw, but Alva led 4-2. Goldbug Kyler Penco stole the ball and scored on a fast break. Penco scored again, and Alva led 8-2.

Chisholm's Tristan Crosswhite added a couple of free throws. Feely scored for Alva on a Reed pass. Then Reed picked off a pass and raced down the court to score. Bullard had the last points of the quarter with two free throws. Alva led 12-5.

Phillip Randall sank a nice three-pointer for Alva to open the second quarter. Chisholm's Kellen Epps answered with a deep right wing trey. Jaxon Jones made a jump shot for Alva and then added a second basket shortly after. Alva led 19-8. Penco scored on a basket and was fouled. He made that one also for the three-point play.

The Goldbugs continued to add points with a Kaden Slater put-back, a steal and fast break by Daylon Malone and another Penco basket. Bullard scored for Chisholm and Bryce Patton added a couple of free throws. Randall was fouled as he went for a basket and made both free throws for Alva. The Goldbugs led 30-12

Feely scored an Alva basket followed by one from Bullard for the Longhorns. Langley Amon went to the charity stripe on a one-and-one, making the first and missing the second. The half ended with Alva leading 32-15.

The Alva lead began to shrink in the third quarter as Chisholm scored ten points before the Goldbugs could get anything. Epps led off with a trey followed by baskets from Daniels and Crosswhite. Patton scored from three-point range, and the Alva lead was narrowed to seven at 32-25.

Randall went to the free throw line and made one of two shots for Alva. Reed was fouled as he scored an Alva basket. He made the free throw, and Alva led 36-25. Camden Daniels scored a basket for the Longhorns. Penco answered with two points. Bullard made two for Chisholm, but Hofen added an Alva basket. The Goldbugs led by 11 at 40-29.

Hofen pulled off a steal and the ball eventually went to Penco who scored and was fouled. He made the free throw, to give Alva a 14 point margin. Epps cut into that with another three-pointer. Hofen scored another basket, and Bullard added two for Chisholm. Penco was fouled as he aimed for a basket, but he made only one of the two shots. Bullard added a basket for the Longhorns to finish the quarter. Alva led 46-36.

After a few missed shots, Chisholm added the first point of the final quarter on a free throw from Bullard. Reed hit a three-pointer to give Alva a 12-point lead. Bullard answered with two points, but Jones hit an Alva basket. Penco sank a three-pointer from the deep right. Bullard added another Chisholm basket. Alva now led 54-41.

The Goldbugs were led in scoring by Penco with 22 followed by Reed with 15. Feely, Randall and Jones each had six. Rounding out the total were Slater with five, Hofen four and Malone three.

Bullard led the Longhorns with 22 points followed by Epps who made all his 12 points on treys. Patton had five points. Daniels and Crosswhite had four each, and Amon had one.

The Alva Goldbugs, ranked No. 2 in 3A, are now 13-1 on the season while Chisholm falls to 3-10. Alva will host Newkirk on Tuesday night before heading to the Pawhuska tournament on Thursday.