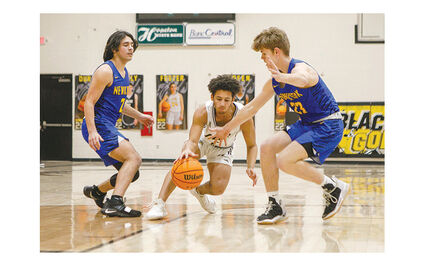 Goldbug Daylon Malone (2) dribbles his way out of Newkirk's defense.

The Newkirk Tigers have improved since the Alva Goldbugs beat them in early December 60-30. The Goldbugs still won the home game Tuesday night, but the margin was 20 points instead of 30.

In the first quarter, Alva outscored Newkirk 14 to seven. The Goldbugs added another 15 points in the second while the Tigers made only nine for an Alva lead of 29-16 at halftime. Both teams scored 11 points in the third for a 40-27 score. In the final period, the Tigers hit a couple of baskets while the Goldbugs couldn't get the ball through the hoop. A couple of free throws broke the drought, and Alva went on a 13 point run before Newkirk managed one more basket. The final was Alva 53, Newkirk 33.

Senior Goldbug Jackson Feely opened the game with a basket followed by one from senior Kaden Slater on a Feely assist. Tiger Wyatt Stone scored a basket. Then Austin Reed sank a left wing three. Kyler Penco hit a layup and was fouled. He made good on the free throw, and Alva led 10-2. Penco sat out much of the first quarter after coming down wrong on an ankle.

Daniel Herrelson scored for the Tigers to end Alva's eight-point run. Feely made another basket on a Slater assist. Then Feely picked off the ball from Newkirk. The basketball made it to Reed who was fouled when he went for the basket. Reed made both free throws for a 14-4 Alva lead. Herrelson made a three-pointer for the Tigers. He tried a deep three at the buzzer but it didn't go in. Alva led 14-7 at the end of the first quarter.

Tiger senior Ean Watters opened the second quarter with a trey. Slater answered with a three-pointer for Alva. Reed made a basket to put Alva up 19-10. Clayton Bergman scored a Tiger basket, but Reed hit another shot on an assist from Philip Randall. Feely blocked Bergman as he went for a basket. Penco scored from three-point range on a Reed assist, and Alva led 24-12.

Feely made another nice block to keep Jaykob Shirley from scoring, but Watters made a Newkirk basket. Braden Hofen was fouled and went to the line for a one-and-one but missed the shot. Feely added a trey for Alva. Then Hofen made a basket. Shirley finished out the half with two free throws, and Alva led 29-16 at the half.

Watters was fouled and made one of two chances to begin the third quarter. Vap hit a three-pointer to cut Alva's lead to 29-20. Penco scored on a Feely assist. Then Feely made a basket after Alva picked off the ball. Bergman scored for the Tigers, and Feely followed with a trey. Alva now led 36-22.

Tiger Blake Johnston scored from three-point range followed by a Reed basket. Reed took the ball down court on a fast-break but couldn't find an opening so passed to Hofen who made the basket. Watters scored for Newkirk. Goldbug Weston Tucker went for a basket but was fouled. He missed both shots. The third quarter ended with Alva leading 40-27.

Reed made two free throws. Vap went to the charity stripe for a one-and-one but missed the basket. Hofen scored and was fouled, making the third point from the free throw line. Daylon Malone stole the ball and went to the rim for two. The Goldbugs led 47-31.

Reed sank a three-pointer and was fouled. He made good on the free throw. Penco was next at the foul line with a one-and-one. He made that one and the second as well. Alva now led 53-31. Herrelson went for a trey but was blocked by Feely. Herrelson managed a basket in the final seconds, and the final was Alva 53, Newkirk 33.

Alva scoring was led by Reed with 17 followed by Feely with 12 and Penco with 10. Hofen had seven, Slater five and Malone two. Like the Ladybugs, the Goldbugs held down the turnovers with only 12 for the game. They scored on nine of 16 trips to the free throw line.

The Newkirk scoring was led by Bergman and Watters with eight each. Herrelson had seven, Vap and Johnston had three apiece, and Shirley and Stone made two points each.

The Goldbugs take a 14-1 season record and a Class 3A second place ranking into tournament play at Pawhuska beginning Thursday.