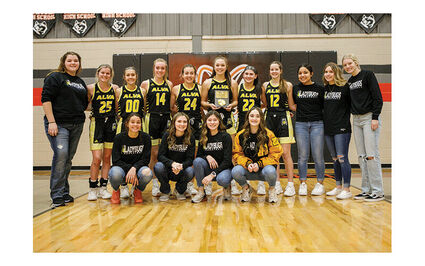 The Alva Ladybugs easily dominated the Jenks sophomore team in the tournament semi-finals at Pawhuska Friday afternoon. Coming off a 42-34 loss to Crossings Christian Thursday, the Ladybugs needed to win Friday in order to advance. Pawhuska's Blue Sky Tournament does not have a game for seventh place. The Alva girls accomplished their goal, winning 76-20.

The Lady Trojans managed only four points in the opening quarter while the Ladybugs poured in 19. The second quarter was more of the same with the Ladybugs leading 31-7 at the half. Jenks rallied to score nine points in the third quarter, but it wasn't nearly enough as Alva put 31 points on the board to lead 62-16. In the final period, the Ladybugs had 14 points to four for Jenks, winning 76-20.

Scoring opened with Alva's Brooke Perez at the free throw line to make one of two shots. Perez caused a turnover and got the ball to Jaycee Kelln who scored. Lakin Gaddy, Morgan Heath and Mary Kate Foster made Alva baskets and then Heath added a free throw. Perez sank another basket and later scored one from the charity stripe to complete a 16-0 opening run.

The Lady Trojans finally scored on a three-point shot by Cameron Anderson. Perez went to the free throw line for another Alva point. Then Cameron Bacon managed a basket for Jenks. Kelln topped off the quarter with another basket, and Alva led 19-4 at the end of one.

Kelln started the second quarter with a basket. Heath went to the rim but was fouled, making both free throws. Gaddy added a layup, and Alva led 25-4. The Ladybugs had two free throws from Heath and one by Perez. Then Carly Argo sank a trey, and the Ladybugs were up 31-4. Jenks' Mollie Thomas managed a three-pointer at the buzzer. Alva led 31-7 at the half.

Alva made only nine of 15 shots from the free throw line in the first half, but it didn't matter much with the scoring margin.

Ladybug Mary Kate Foster was first to score in the third quarter followed by a bucket from Perez. Anderson sank another three-pointer for Jenks. Chole Durkee answered with a left wing three. Foster added two points from the free throw stripe, and Alva led 40-10. Argo widened the gap with a three-pointer, but Anderson answered with her fourth trey in the game. Argo scored another trey from the left corner, and Durkee followed with a three-pointer. The Ladybugs led 49-13.

Winnie Zang went to the free throw line and made two points for Jenks. Then Mattie Walkup hit a basket to bring Jenks' total to 16. The Ladybugs went on another unanswered scoring run with a trey from Gaddy, two baskets and a foul shot from Kelln, and a basket from Argo. As time expired on the clock, Argo hit another three-pointer, her fourth in the game. The Ladybugs led 62-16 for the third quarter.

In the final period it was all Alva except for two baskets by Watson for Jenks. Gaddy and Foster each contributed two baskets while Gaddy also added a couple of free throws. Perez and Kelln each scored a basket, and the final score was Alva 76, Jenks 20.

The victory increased the Ladybug record to 12-5 for the season and secured a slot in the consolation final on Saturday.

Argo and Gaddy led the Ladybugs in scoring with 14 each followed by Kelln with 13 and Perez with 12. Foster had 10 points, Health seven and Durkee six.

Anderson led the Lady Trojans with nine points followed by Watson with four and Thomas three. Zang and Bacon each had one.