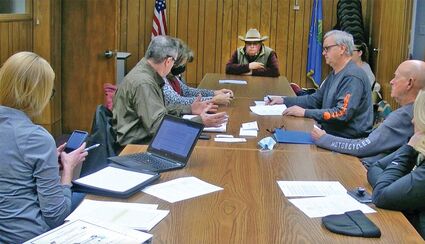 At the table for the Woods County EMS Board meeting Tuesday are, clockwise from left: Julie Dennis (not a board member), Brett Smith, Jane Adair, Commissioner Randy McMurphy, Joe Phillips and Arden Chaffee. An unidentified visitor is at right. Behind Phillips is Ashley Woodall, county E911 director. Photo by

County Commissioner Randy McMurphy administered the oath of office to Jane Adair Tuesday evening. She was sworn in as the newest member of the Woods County EMS Board which administers funds from county EMS 522 District ad valorem taxes.

Other board members at the meeting were Vice Chair Arden Chaffee, Secretary Joe Phillips and Treasurer Brett Smith. Adair will be the member at large. In the absence of Chairman Matt Sutter, Chaffee presided over the meeting which lasted more than two hours.

"You can't do it. You can't pay anybody because there's nothing in the budget to pay them," said McMurphy. "All the money that comes in is designated to be spent for your board expenditures and the rest of it to go to the ambulance services. The ballot did not put anything on there for an administrator."

"Well, most all of them that do that manage the ambulance services," said McMurphy. "We're one of the few standalone deals. All you are is a pass-through here of that tax money to the ambulances. There's no intention by the voters to take money out to pay salaries out of this money. That is the Freedom, Alva or Waynoka's call about how they spend that money.

"You all are just to pass that money on. Once you receive it, pass it to those entities and then review their expenditures on a quarterly basis. A lot of them are doing it monthly where they hire a private firm."

"My question then is who do you have in mind to do the clerical work?" asked Phillips.

"The secretary of the board," answered McMurphy.

"I'm not doing it anymore," said Phillips who is the board secretary. "I'm spending six to ten hours every time we have one of these meetings, and I didn't sign up to do that. The thing that was told to me was just like you said, we're a pass-through. Well, a pass-through isn't spending 6-10 hours at a time making these agendas, making these minutes, on the telephone, going to the bond people. I'm not doing that anymore. If we can't have an administrator, that's fine. If we can't have a consultant, that's fine. We have to have some clerical work."

"Well it wasn't stated in the ballot that there would be any fund used here except the mandatory – the budget maker, the auditor, your fees, your bonding and those four things that I told you: the public (notice) when you paid the paper, the bonding, the budget maker and the auditor," said McMurphy.

Phillips said at the first meeting McMurphy told them they didn't need an administrator, not that they couldn't have one. "I don't know if that's a personal opinion," he added.

"No, I went back and reviewed the ballot," said McMurphy. "That ballot did not have a place for that. This money is to be distributed to the ambulance districts."

Phillips asked again, "Who's going to do the clerical work?"

"Well, if you don't want to do it, I guess we'll find somebody that will, but it has to be volunteer." said McMurphy.

Phillips asked if there were any county employees that could do it. McMurphy said they could figure something out. "The only place where they hire administrators is where they manage ... Woodward County, Alfalfa County," said McMurphy.

"They could because they manage the ambulance deal," said McMurphy. Alfalfa County contracts with a private EMS company to handle their needs. McMurphy said the money from taxes is to be spent by the ambulance districts (Alva, Freedom and Waynoka).

"Now if they want to pay an administrator, if they get together and want to do that, I think that's a doable deal," said McMurphy. "But that would be their call, and it would take a portion of their money and pool it together, and it would be a separate deal. That would be between them, for them to decide."

"It would be for them to decide," said Chaffee. "It's not for us to decide. We are to approve those expenditures on a quarterly basis." However, Chaffee said, Phillips is doing a lot of work on his own and he didn't sign on for that.

"But we've got to get some by-laws adopted and we do have to appoint probably two, at least, authorized signers for the bank account," said Smith. "When we're past that, there shouldn't be that much." He said he knew how much work Phillips has been putting in. "I know Joe's spent hours and hours so far."

McMurphy said the important things are dates of quarterly meetings to come after all three EMS districts get their bank statements, adopting by-laws and the contracts with the three EMS districts. He recommended they require each EMS district to put the 522 funds in a separate bank account from their regular budgeted funds.

The board took no action on the EMS consultant job description.

Former Alva EMS employee Julie Dennis, who attends all the EMS Board meetings so far, provided Phillips with sample by-laws from the Oklahoma State Health Department (OSHD) website on 522 districts. Phillips modified the sample to fit Woods County and had Dennis type in the amendments. He then submitted printed copies to the board members at the meeting.

Phillips said Article 4, Section 1 would need to be amended since it stated the power of the board to hire or dismiss an administrator.

Chaffee read through the by-laws section by section giving board members the opportunity to discuss if and how each section should be changed. Dennis typed the changes into her laptop computer while board members made handwritten notes on their copies.

Each board member is to have a $10,000 bond. Phillips said he talked with a local insurance agency that was working with him to set up bonding. He did not have a cost for the service yet.

The by-laws state each board member will serve a five-year term. Initially, appointments are staggered to allow for one term expiration and new appointment each year. At the November meeting, it was determined by drawing numbers that Sutter's term will expire Dec. 31, 2022. Smith's term ends in 2023, Phillips in 2024, Adair in 2025, and Chaffee in 2026.

The by-laws referenced setting meeting dates. Also in the November meeting, the 2022 dates were set for Jan. 18 (which was moved to Jan. 25), April 19, July 19 and Oct. 18 at 5:30 p.m. These are quarterly meetings on the third Tuesday of those months. Since the meeting dates were not turned in to the county clerk by the Dec. 15 deadline, all of the meetings this year are considered special meetings requiring notice to be posted 48 hours in advance.

Once the by-laws were amended to everyone's satisfaction, Phillips made a motion, seconded by Smith to approve them, and the motion carried unanimously. McMurphy recommended they provide a copy of the by-laws to Assistant District Attorney Brian Mitchell to make sure everything is legally correct.

Next the board looked at sample contracts between the board and the EMS services in the county. Again, samples were provided from the ODHS via Dennis to Phillips. He said he looked through them and thought the shortest one (four pages) was the simplest and best.

McMurphy said since each of the cities handling EMS services operate on a fiscal year budget beginning in July, he would suggest waiting until July to disburse the tax money. He said that County Treasurer David Manning could explain it better. However, he said, if this caused a financial burden for the cities it might not be the best idea.

McMurphy also recommended the by-laws and contracts with services be given to ADA Mitchell for his opinion.

It was about this time that McMurphy left the meeting because he had livestock to tend.

As with the by-laws, Chaffee read through each part of the sample contract while board members discussed possible changes. The board received input from some of the visitors representing EMS services. Dennis also typed these changes into her laptop.

The amended contract form was approved by board members. The contracts will be sent to the three EMS services for their consideration. The board expects that some changes will be requested.

The final business on the agenda was scheduling the next board meeting. They reviewed some of the items that will need to be on the next agenda such as the bonding of board members. Board members discussed contacting several county insurance agencies about the bonding to find the best quote. Phillips said he would be willing to do that. 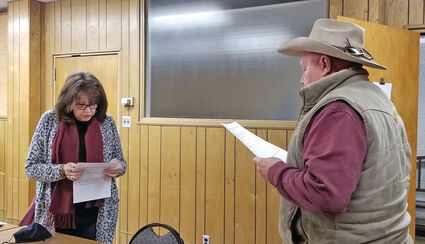 Jane Adair (left) reads her oath of office Tuesday. She was sworn in by County Commissioner Randy McMurphy (right) as the fifth member of the Woods County EMS Board.

They also discussed who should sign checks to pay for the board's bills. The board's account will be set up at the Bank of Freedom. They decided everyone should be on the signature card with two board members required to sign each check. Smith was asked to bring signature cards to the next meeting.

As they discussed meeting in April, Smith said they should meet earlier. He already has EMS Board bills waiting to be paid, but that can't happen until they meet and approve signees.

Phillips was directed to type these items into the next meeting agenda. He said that Dennis has been typing the agendas since he is a two-finger typist.

After a little discussion, the board members agreed to meet on Tuesday, Feb. 15, at 5:30 p.m. in the courthouse conference room, and the meeting was adjourned.