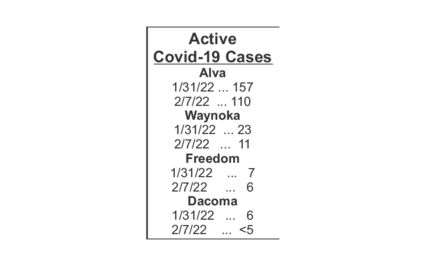 The number of active Covid-19 cases in Alva has dropped from 157 to 110 this week according to data from the Oklahoma State Department of Health (OSDH). Waynoka cases decreased from 23 to 11. Freedom went down from seven to six cases, and Dacoma's six active cases last week dropped below five this week. The OSDH reports any number below five as zero. The community numbers were updated as of Monday, Feb. 7, and reported on Wednesday.

Northwestern Oklahoma State University is reporting only one student and no employees with active Covid cases as of Friday, Feb. 4, among all three campuses in Alva, Enid and Woodward. NWOSU updates their report once a week.

On Wednesday, the OSDH reported 39,043 active Covid-19 cases in Oklahoma compared to 76,107 a week ago. There were 20,289 cases reported in the last week, a 66.8 percent decrease from the week before. During the past week, there were 232 Covid deaths reported in the state.

Just over half (50.5 percent) of Woods County residents have received at least one dose of a Covid vaccine. Alfalfa County is slightly higher at 52.7 percent. Major County is 58.6 percent while Woodward County is listed at 45.8 percent.

In other neighboring counties, Buffalo has six cases, Fairview 52 and Woodward 196. Enid has 734 this week compared to 1295 last week.