Goldbugs get third win over Woodward 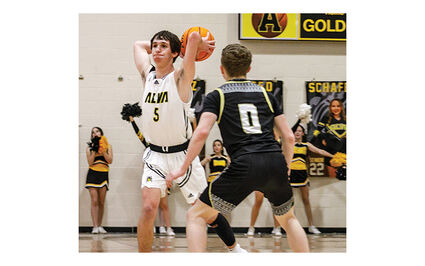 Goldbug Chuck Shelite (5) chunks the ball to his teammate.

The Alva Goldbugs didn't seem to be in the game as they started the home game against Woodward. The Boomers began with a 10-0 run before Alva got on the board. The five Goldbug seniors started the game, but Kyler Penco came off the bench to challenge Woodward and take back the lead 22-19 at the half. The score stayed close until the final period when Alva pulled ahead to win 45-36.

Woodward freshman Kash Shipley started the scoring with a three-point shot followed by a Jake Mead basket. Shipley hit another trey, and Jesus Cano scored to put the Boomers up 10-0.

Jackson Feely put Alva on the scoreboard with a basket on a Penco assist. Then Penco went in for a reverse layup to finish the quarter. Zack Chavez tried for a triple, but it was an air ball. The quarter ended with Woodward leading 10-4.

In the second quarter, the Goldbugs added two points when Braden Hofen rebounded a Feely miss and tipped the ball in. Mead went to the free throw line but missed both tries. Penco passed to Feely who scored, and Alva was within two at 10-8. Shipley widened the margin with a basket. Penco was fouled while shooting but missed both chances. Penco then went on his own 6-0 run with a couple of layups and another basket off a Jaxon Jones rebound. Shipley made two free throws to tie the score at 14.

The Boomers cut into the lead with a Chavez three-pointer and a basket from Cano. Goldbug Philip Randall scored on a put-back, and the Goldbugs led 22-19 at halftime

Mead narrowed the Alva lead to one point with a couple of made free throws. The Boomers took the lead on a Shipley basket at 23-22, but Chuck Shelite scored on a runner to take it back. Penco hit a left-handed layup to give the Goldbugs a 26-23 lead.

Mead cut into the margin with a basket, but Daylon Malone passed to Reed who scored. Mead scored for Woodward, and Alva led by one point. Feely went to the free throw line, making one of two. At the end of the third quarter, Alva led by two points, 29-27. 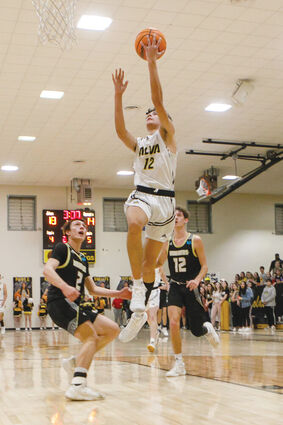 Alva's Kyler Penco (12) makes a two-pointer with a lay-up during Tuesday night's game against Woodward.

Penco grabbed an offensive rebound and put the ball through the hoop. Shipley fouled out, sending Malone to the free throw line to make both shots. Penco scored on a rebound and tip-in; he then stole the ball and scored two more points on a layup. Alva led 41-33.

The Alva Goldbugs are now 20-2 on the season. Alva was led in scoring by Penco with 24 points. Feely, Malone and Reed each had five points. Hofen, Shelite and Randall had two each.

Shipley led the Boomers with 15 points followed by Mead with 11. Chavez had six points and Cano four.

The Goldbugs will travel to Okeene on Monday, Feb. 14, to take on the Minco Bulldogs for the final contest of the regular season.