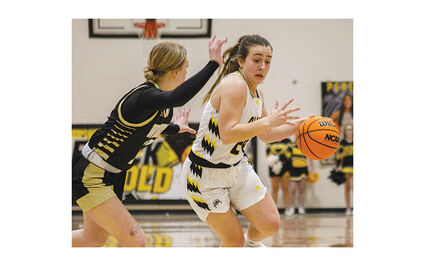 The Alva Ladybugs had their third meeting of the season Tuesday night. This time it was on the Ladybugs’ home court on Senior Night. The location didn’t help as the Alva girls lost to the Lady Boomers 54-28.

The Ladybugs stayed close in scoring through the first half, but the second half was the Alva team’s undoing. Woodward put on a scoring blitz while the Ladybugs had a difficult time getting shots to fall. Woodward had a narrow 24-21 lead after the first half, but held Alva to just five points in the third and two in the fourth quarter for the win.

In the first quarter, the Ladybugs made nearly all their points on free throws. Jaycee Kelln had the lone basket while Brooke Perez made three trips to the free throw line, hitting five of six attempts.

For the Lady Boomers, Thessaly Pfeifer put in six points in the first period with Averi Edwards scoring three and Bryleigh Douglas-Fisher two.

Edwards led off the scoring in the second quarter with two points for Woodward. Perez scored for Alva on a rebound and stick-back. Pfeifer made two points from the free throw line, and Woodward led 15-9. Woodward committed their eighth foul sending Chloe Durkee to the charity stripe for a one-and-one. She scored on both shots. Then Morgan Heath was fouled and made one of two chances. Durkee sank a basket from three-point range to tie the score at 15 all.

Pfeifer made a Woodward basket and was fouled but missed the free throw. Durkee was next at the foul line, hitting both shots. Masey Porter got on the scoreboard with two points for Woodward. Pfeifer grabbed a defensive rebound and raced down the floor to the rim. She was fouled and made both free throws. Woodward now led 21-17.

Perez went to the free throw line, making both shots. She followed that with a basket to tie the game at 21. Bryleigh Douglas-Fisher made a last minute three-point shot. Durkee tried for a three, but it didn’t go in. At the end of two quarters, Woodward led 24-21.

Scoring in the second half opened with Perez once again at the free throw line where she made one of two shots. Pfeifer hit a Woodward basket and was fouled, making the free throw. Porter scored from three-point territory, and Pfeifer made another basket. Woodward now led 32-22.

Perez made it to the basket for Alva, and then Pfeifer banked in a shot. Perez scored another two points for the Ladybugs. Riley Moore and Edwards made the final four points of the quarter. Woodward led 38-26 at the end of the third quarter. All of Alva’s five points in the period came from Perez. 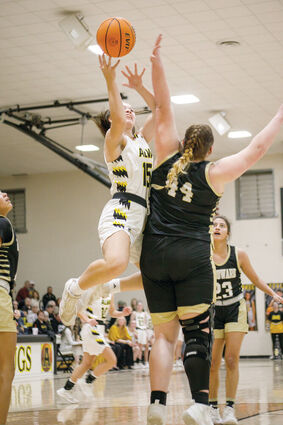 In the final quarter, Woodward scored ten points before Alva added another score. Triniti Miller was fouled and made both free throws for Alva. With Woodward leading 48-28, Alva was substituting off the bench, but Woodward still kept their starters in the game. After two more baskets, the Woodward coach opted to replace three of the starters. Douglas-Fisher made the final basket, and Woodward won 54-28.

Perez led the Ladybug scoring with 16 points followed by Durkee with seven. Kelln and Miller each had two points while Heath had one. The Ladybugs made 15 of 18 free throws and are now 14-8 on the season.

Woodward was led by Pfeifer with 24 points followed by Porter with ten and Edwards with nine. Douglas-Fisher had seven and Moore four. The Class 4A Lady Boomers are now 13-7 for the season.

The Ladybugs will have one more game before districts as they travel to Okeene Monday, Feb. 14, to take on the Minco Lady Bulldogs.