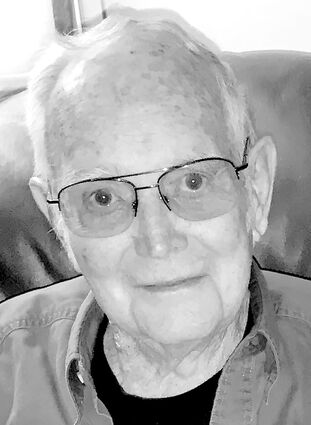 Funeral services will be Friday, February 18, 2022, at 2 p.m. at the Church of God with Reverend Bob Brown officiating. Burial will follow in Pleasant View Cemetery under the direction of Wharton Funeral Chapel. Online condolences may be made at http://www.whartonfuneralchapel.com.

Bernard Derald Thorne, was welcomed into the arms of Jesus, Friday, February 11, 2022, at the age of 91 years and 4 days after a long battle with cancer. If you ever checked in and asked him how he was doing he would reply with a big smile and say "I'm blessed." and he truly was a blessed man.

Bernie, as his friends and family called him, was born, February 7, 1931, in Lonetree Township, Clay County, Iowa to Dolly (Lorenzon) and John Robert Thorne. He graduated salutatorian from high school. Shortly after graduation, Bernie enlisted in the U.S. Navy where he served from 1950-1954 during the Korean War. While in service, he went to 1 year of EMS school in Treasure Island, California, learning to maintain and repair the electrical components of the radar systems on the ships. He was stationed on the General A.E. Anderson troop transport through 1952. In 1953 he was discharged to serve with new construction detail for the USS Willis A. Lee, DL4. After being discharged in 1954, Bernie moved back home to Iowa to work on the family farm.

On September, 27, 1957, Bernie was united in marriage to Arleen Loreen Prins. They moved to northwest Arkansas in 1964 where they harvested green beans. In 1985, Bernie started a metal roofing company which he operated for the next 26 years along with help from his son. Later in life, their daughters moved them to Northwest Oklahoma so that they could watch over them. At 81 years young, Bernie, obtained his insurance license and worked in his daughter's insurance office in Alva until finally embracing retirement in 2016.

Bernie enjoyed attending the Church of God in Alva, and he was a member of the American Legion and the Southwest Navion Air Group. In his younger years, he enjoyed flying airplanes. He also loved his family and enjoyed spending time with them. He was always interested in a round of card games after a family meal and passed on this tradition to his family.

He was preceded in death by his parents, his daughter, Jo McDermott, sister, Marjorie Scharnberg and her husband Darrell, brother, Herbert Thorne, brother-in-law, Don Baumeister, and sister-in-law, Charlotte Thorne.

In lieu of flowers, donations can be made to the Freedom Gates Boys Ranch through Wharton Funeral Chapel.