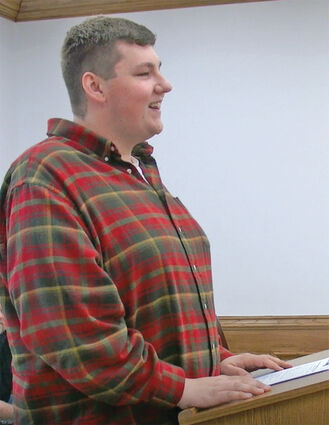 Alva Chamber Executive Director Jodie Bradford presented the financial report. Only two approved events have not been paid the promised funds, the Alva Arena Authority and the Alva Bull Battle VI. With those subtracted, the committee has $423,569.66 available in tourism tax funding.

Joe Parsons, who helped with last year's event, spoke to the tourism committee about plans for this summer's event. Set for Saturday, June 4, from 1:00 to 9:00 p.m., the program will feature Kyle Dillingham and Horseshoe Road at 7 p.m. Other local musicians will also perform.

Booths will be set up around the square on the sidewalks with vendors, crafts and artists. There is no charge for the booths. Food trucks are also invited to participate. Last year an estimated 400 to 500 people attended. Parsons said he talked with people who came from Woodward and Enid.

Ritter noticed the expenses made no mention of sanitation. Decker said the Graceful Arts Gallery will be open and people may use the restrooms there as they did last year.

Since scheduling the event, Decker has learned the art festival is also planned for that weekend. She expects to cooperative with them on scheduling events.

Freedom West requested $3,500 in tourism tax funds to pay for the headliner band. The remaining expenses will be covered by Oklahoma Arts Council funding.

Martin made a motion to approve the $3,500, seconded by Barton, and the motion carried by a unanimous vote.

Alva Police Chief Ben Orcutt told the tourism committee that plans are still fluid for Cars, Concerts and BBQ Contests. The event is being sponsored by the Alva Police Department with funds raised going to purchase police equipment.

The main focus is the barbecue contests held during the two-day event which is set to coincide with Alva High School graduation. The people's choice contest will be held on Friday with contestants cooking ribs. People will visit each contestant to receive a sample. The winners will be determined by votes cast by the attendees. The Friday BBQ contest will be followed by a concert.

R.A.C.E. is also participating in the event with possible plans for a cruise on Friday night and a small car show on Saturday.

Saturday morning will be the EMS 5K run. The Saturday BBQ contests will feature ribs, chicken and desserts. Judges will award prizes in each category. In each of the contests, the first place team gets a trophy to take home.

The BBQ contests are sanctioned by the Kansas City Barbecue Society which will also publicize the event. With minor social media postings, Orcutt said they are already receiving inquiries from BBQ teams from as far away as Kansas City.

Since this is a first time event, Orcutt says the number of BBQ contest teams could be anywhere from 15 to 50. Attendance at similar contests is from 500 to 1,000 people.

Orcutt has contacted local metal artist Chris Green about designing a unique trophy that will stand out.

Ritter asked about entry fees for the contests. Orcutt said the fee is $100 per team for the two-meat contest, $50 for the people's choice and $25 for the dessert.

Parsons said when she first learned this new event was requesting $14,250 she was against it. However, as she learned more about it she thought it was worth giving it a chance. Parsons made a motion to grant the funding, seconded by Martin. The motion was approved unanimously. 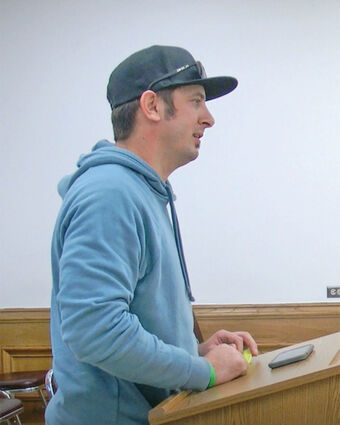 Tyler Ricke presents information on June and July Northwest Oklahoma Junior Rodeo Association events to be held in Alva. He asked about some funding help for the youth rodeo events.

Tyler Ricke of Attica, Kansas, presented the funding request for the Northwest Oklahoma Junior Rodeo Association (NWOJR). The organization has presented youth rodeos in Alva since 2018, requesting $6,000 for each event.

Ricke said the participants like Alva's central location. The two-day rodeos attract a large number of contestants and their families from Kansas, Oklahoma and Texas. Last year the group had 110 members and gave away 46 saddles. The organization has been active since 1990.

The two events are scheduled for June 11-12 and July 30-31 at the NWOSU practice facility just north of Alva.

When asked about the negative budget balance, Ricke said it was up to the NWOJR board "to make it happen." They will sell sponsorships to make up the difference.