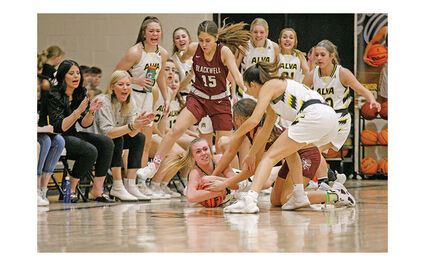 Ladybug Jaycee Kelln (14) holds tight to a runaway ball in front of the Alva bench Saturday.

The Alva Ladybugs tied the Blackwell Lady Maroons in the first quarter but took over the game from there, winning 55-21. The district win puts the Ladybugs in the winners' bracket of the semi-finals of regionals. They will take on Lindsay at 6:30 p.m. Thursday in Hennessey. A win in that game will put them in the finals Saturday in Perry. A loss would move them into the consolation bracket to play at 6:30 p.m. Friday in Perry. 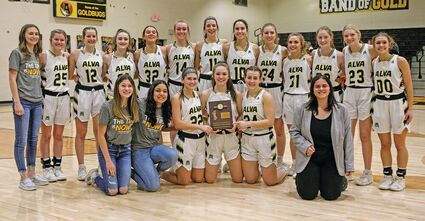 After a 9-9 tie in the first quarter, the Ladybugs jumped to a 24-11 lead at the half. Brooke Perez poured in six of the 16 Alva points in the second period while the Lady Maroons were held to a couple of free throws.

In the third quarter, six Ladybugs scored. It was Carly Argo's birthday, and she came in off the bench to hit a three-point shot. Blackwell was again held to just two points. In the final period, the Lady Maroons managed six points, but four Ladybugs scored 14 points for the final 55-21 victory.

The Ladybugs were led by Perez and Lakin Gaddy with 12 points each while Morgan Heath made 11. Chloe Durkee had five, Jaycee Kelln and Triniti Miller scored four each, Argo had three and Mary Kate Foster made two points.

The Ladybugs take a 16-8 record into regionals while the Lady Maroons fall to 6-16 and play Hennessey in the consolation side of regionals Thursday.